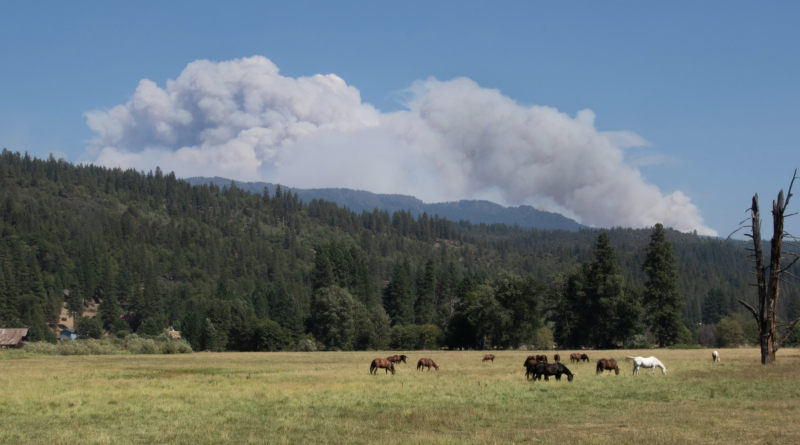 The beauty and the beast come together in the East Quincy area off of Chandler Road. Photo by Lisa Kelly
News
August 31, 2021September 2, 2021 Editor

Nobody likes a broken record.  But the seven week old Dixie Fire is playing the same old tune today. Once again the north end of the fire was very active, but it was the south end of the fire near Lake Davis that produced a smoke column reminiscent of Armageddon.

The entire fire area remains under a red flag warning until 11 p.m. tonight because of strong southwest winds with gusts in excess of 35 mph and single digit relative humidity.  Add in historically dry fuels and you have all the elements necessary for extreme fire behavior.

North of Lake Davis, on the portion of the fire that began as the Grizzly spot fire, firefighters were running out of time and running out of ground to get line out in front of the fire to turn it north away from Grizzly Ridge.  And it was too late to turn the fire into the Walker Fire scar.  The fire spread beyond that point on Monday.

Fire overhead developed plans for a three-part attack.  Firefighters would turn their fire line to the north and head down from Grizzly Ridge and connect their fire line into the very northwest corner of Lake Davis.  This would close off the fire from spreading toward the Highway 70 corridor and the west side of Lake Davis. The second part of the attack was to use an existing road, widened by dozers to bring a fire line from the fire down to the northeast corner of Lake Davis.  This would prevent spread down the east side of the lake to Portola.

The third, and most difficult part of the plan is to use the 28N01 road in the vicinity of Squaw Valley well out ahead of the eastern-most edge of the fire and run that line to Clover Valley using existing roads, and then finally tie that into the recent Beckwourth Complex fire scar. Dozers would widen the line and firing over night would add depth to the line.

Work began on implementing all three phases of this plan last night.  Firing from Grizzly Ridge has turned the corner heading north off of Grizzly Ridge and should be successfully tied in the northwest corner of Lake Davis by morning.

Firing was also conducted on the second phase of the plan. This held most of the day but there was a large spot this afternoon that is currently being worked on. Firing on the third part of the plan will probably occur tonight.

Notice that all of the firing is occurring at night.  Burning conditions are very favorable at night.  Adding low intensity fire to the inside edges of the fire lines removes fuel and effectively builds a fire line that is several times larger than it would otherwise be.  This enhances the firefighters’ chances of holding the line during the day when burning conditions are much more severe.

On the north end of the fire near Lassen Park, there was an intense fire fight today that included a sustained air attack.  Both small and medium air tankers made round trips between retardant bases in Redding and Chester all day long.

Operations Section Chief Mike Wink said the fire is still holding on the northwest corner where winds are favorable but they continue to have problems on the northeast side where the wind direction is not in their favor.  They have kept the fire from crossing Highway 44 but continue to battle numerous spot fires that have crossed their secondary lines to the east of the highway.

For people following the satellite generated fire maps available on the internet, there was another example today of how those can be misleading.  A widely distributed satellite generated map showed what looked like a large slop-over on the west side of Grizzly Ridge above Spring Garden.  This understandably concerned many local residents.  Firefighters on the ground confirmed that no such slop-over occurred.

Winds will continue to blow out of the southwest tomorrow but should be lighter than today bringing a small amount of relief to fire fighters.  The fire will remain active but a bit less extreme than it has been for the last two days.

The fire size is now reported to be 819,956 acres.  Fire lines near Antelope Lake and along Highway 36 west of Susanville today were reclassified as “contained” bringing the containment for the fire up to 49 percent.

The number of personnel assigned to the Dixie Fire is now 3,970.  This is down from a high of approximatey 6,500.  The reduction is due in part to much of the area no longer actively burning.  More importantly there is competition for fire suppression resources from several other fires, most notably the Caldor Fire burning near Lake Tahoe.  Fire managers are constantly adjusting resource assignments between fires