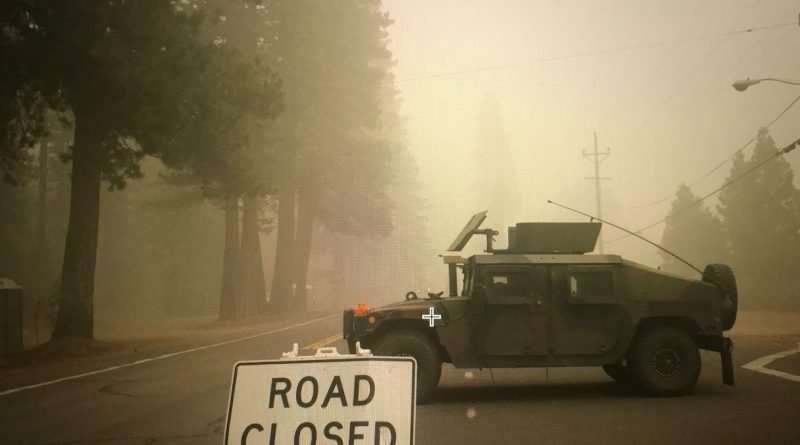 The National Guard is in place to ensure no one enters Taylorsville at the corner of 89 and Arlington Road. Photo by Spanish Peak Productions
News
August 7, 2021August 9, 2021 Editor

The nightly incident command team meeting held tonight, Aug. 7, lasted about 45 minutes and included some new information, but most of the recaps for the actual firefighting efforts were reiterations from this morning’s presentations from the East and West zones. That’s because with another day of inversion, fire behavior was moderate, and crews chipped away at building containment lines and doing structure preparation.

Most of the speakers reiterated their appreciation for all of the agencies involved, the firefighters, and the public, and their empathy for all of those impacted by the Dixie Fire.

However there were some developments of note:

Four firefighters were injured last evening when a limb fell on them while fighting the fire. Three have been released and one remains in the hospital recovering from his injuries.

Thanks to a report from Lassen Volcanic National Park Superintendent Jim Richardson,  it was learned just how much the fire has burned in the park. He said that it entered the southeast corner and ran almost the length of the park, burning about 8,000 acres. It is is expected to spread to the west. The fire has not reached Drakesbad Guest Ranch in the Warner Valley, but it did burn down the historic Harkness Fire Lookout. “That’s the first loss, but other resources are at risk, particularly historic facilities,” he said.

National Guard air resources – helicopters and rescue crews, as well as firefighter hand crews — have been assigned to the fire. More resources have arrived to staff road closures and assist law enforcement, and more resources are ordered.

As the fire is wrapping up in the southwest corner of the fire, another Cal Fire incident management team will be established in Susanville, and beginning with the next meeting, broadcasts will be from that location.

Ryan Walbrun, incident meteorologist, reiterated that fire activity on Friday and Saturday was a little bit quieter  due to smoke. “As we look into tomorrow, smoke will still have an impact,” but then conditions will be more like last Monday and Tuesday, with light winds. Weather will remain hot and dry. This will cause the fire to become more active.

Plumas County Sheriff Todd Johns reported two arrests and Lassen County Sheriff Dean Growden reported four arrests of individuals who were in evacuated areas for reportedly unlawful reasons. Both stated their intolerance for such behavior and reiterated that there was a heavy law enforcement presence patrolling evacuated areas.

Both Sheriffs also talked about their roles in providing for animals left behind including ensuring that animals were being fed and watered. Those in Lassen County who need assistance with animals should call 530-257-6121; in Plumas County call 530-283-3673.

Again, both Sheriffs discussed evacuations and the daily conversations they have with the fire management teams to assess when they can be lifted, as well as when they must be ordered. Sheriff Todd Johns addressed the Bucks Lake and Meadow Valley areas directly (they are now on warnings instead of mandatory) that they need to be prepared to leave at a moment’s notice.

Many of tonight’s speakers discussed the ferocity, as well as the capriciousness of this fire. (Not their exact words, but what they want the public to know is that this fire is not done burning, and as it demonstrated on Aug. 4 in Greenville, and then again in Canyon Dam, it can defy the best laid plans of the fire management teams.)

For the first time, many of the speakers addressed the long-term nature of this fire — not only for containment, but for any semblance of a return to normalcy. Sheriff Growden urged patience. Deputy Incident Commander Chris Waters said that there are now 465 miles of fireline around the fire — essentially the distance from Chico to LA  — and every bit of that line needs to be staffed and mopped up.

As of tonight, the fire is 447,723 acres, and is  21 percent contained, with 5,137 personnel assigned. Waters explained the drop in containment (which had been at 35 percent)  — as the fire grows, so does the perimeter, which means less line is contained.

No changes of any substance were reported since this mornings updates, but briefly for the areas where the fire is the most active:

Chester: No structure loss in Chester proper; some structures lost at the Highway 89/36 junction

Almanor West: Two structures and one garage damaged or destroyed

Highway 36 to the west: Deer Creek Lodge, St. Bernard Lodge, and Black Forest all survived, though some other structures in the area were lost.