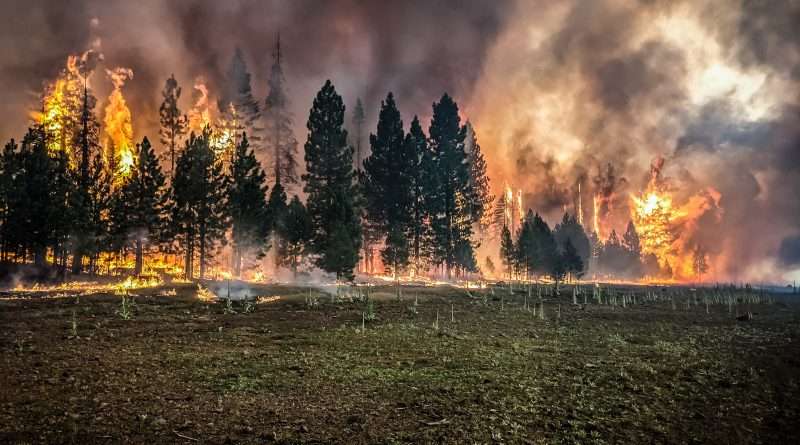 The smoke never lifted yesterday and the inversion continued to moderate the fire’s spread. It’s reported to be 446,723 acres this morning, which represents 12,000 acres of growth overnight. Remember when 12,000 acres was a big fire? The night prior, the Dixie Fire had grown by 71,000 acres, so this morning’s number was a marked improvement.

The Dixie Fire is currently the largest fire burning in the country, and though it ranks number three on Cal Fire’s list of the state’s largest fires (just shy of number two), it is the largest if you remove the complex fires that were the result of several fires merging. The fire is just 21 percent contained. It had been 35 percent contained, but the explosive growth from Aug. 4-5, that caused the fire to increase by nearly one-third dropped the containment level.

Predictions are that the inversion will remain over the fire today resulting in higher humidities, lower temperatures and decreased winds, giving firefighters a chance to make progress on the Dixie.

During his morning update, Operations Section Chief Jake Cagle said that everything is holding in the current footprint along the south perimeter. Crews are still working on the Silver Lake area above Meadow Valley, and he expects it will take another 48 hours to completely mop up the area. Cagle said that all of the perimeter is staffed 24 hours a day.

Last night crews picked up one spot outside the line in Crescent Mills, but it was very small and crews were able to line it and get around it. “Looks really good in there,” Cagle said of Crescent Mills, adding there has been no impact to structures there.

Continuing through Indian Valley everything remains in the footprint, Cagle said. The focus is on the Moonlight finger – the portion of the Dixie Fire that has burned into the Moonlight Fire scar. “There are a lot of heavy snags in there,” Cagle said. While firefighters prefer to go direct on a fire, there are lot of pieces of this area where they will have to go indirect.

“Last night we were going to try and get in front of  it; but had to focus on structure prep,” Cagle said.

He also addressed the Lone Rock spot, which is about 74 acres, and crews were able to get around it. While it’s currently being called a spot from the Dixie Fire, Cagle said it’s under investigation to ensure it’s not a new start.

In the Dyer Mountain area, Cagle said that the dozer line which was built under it held overnight. The goal is to connect that line into the north flank of the Moonlight finger.

Cagle said that today’s weather should mimic yesterday’s, which will give crews a chance to increase containment.

Operations Section Chief Mike Wink provided the morning update for the West Zone. The fire remains the same in the Highway 70 corridor and along the southwest perimeter where crews continue to patrol and mop up.

Wink focused on the 14-mile run north in to Volcanic National Park that occurred on Aug. 4, which he refers to as the left flank. Crews are building fireline along its length, and though there are some challenges, weather conditions are aiding firefighters.

Wink addressed the Warner Valley area where there are about 325 structures. Initial data indicates that 38 structures were either damaged or destroyed, but resources are in the area working to save the rest.

Moving into Chester, no change is reported; no structures were lost inside Chester proper. However, just outside of Chester, at the Highway 89/36 intersection, several structures were destroyed. It had been previously reported that the Cedar Chalet Bakery burned (it was no longer operational, but was a landmark for many.)

There was some good news to report: No damage was reported to Deer Creek Lodge, St. Bernard Lodge, nor the Black Forest Lodge, along Highway 36 west of Chester.

Wink reported no changes to the community of West Almanor — a lot of vegetation burned, but firefighters kept it out of the structures for the most part. As previously reported, two structures and one garage were damaged or destroyed.

Firefighters from the West Zone continue to work on East Almanor with the East Zone. “We are supporting their plan to go direct and do structure prep,” Wink said. This includes widening the Highway 147 corridor.

A joint public meeting will be held tonight at 7 p.m. It can be viewed on Zoom or on Facebook. Plumas News will provide a report following the meeting for those who do not have access. 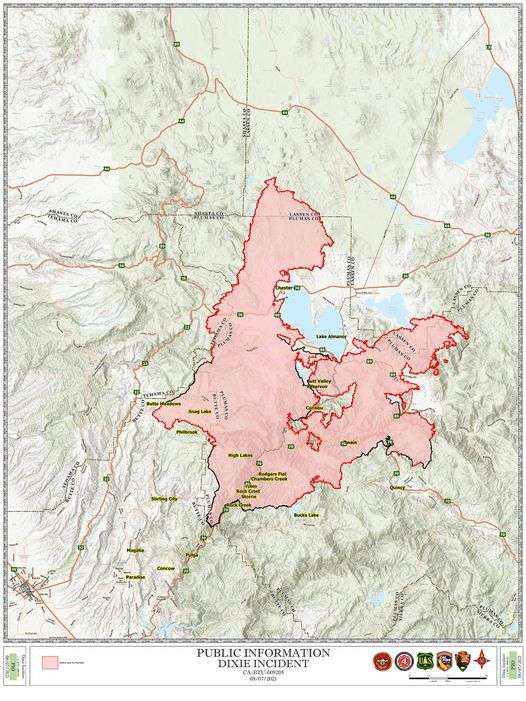