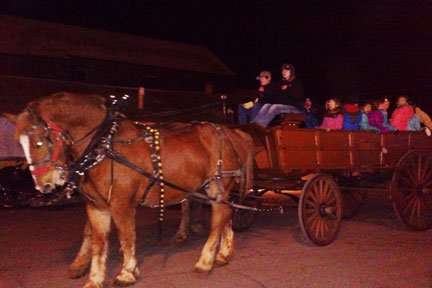 Despite the biting chill of the evening, the Portola Christmas tree lighting and parade on Dec. 2 came off a success, with a large crowd bundled up to watch the glow-in-the-dark parade cruise down Commercial Street and the lighting of the Christmas tree to the cheerful holiday music played by Pete Rhode.

“It was a great night,” Patricia Ryan commented. “Everyone seemed to enjoy themselves very much.”

The parade, staged by Rich McLaughlin, featured some 32 brightly lit and festive entries, including some vehicles that stopped to throw candy canes to the obvious delight of the children in attendance.

With a prize drawing, hot beverages, and various booths to wander through, attendees of the event kept busy and stayed warm by the bonfire in the Red Caboose parking lot, while families joined a long line outside of Plumas Photography to get a photo with the one-and-only Santa Claus.

The evening may have been chilly, but according to many in attendance, it warmed the hearts of many children and families to enjoy this annual event with the community.