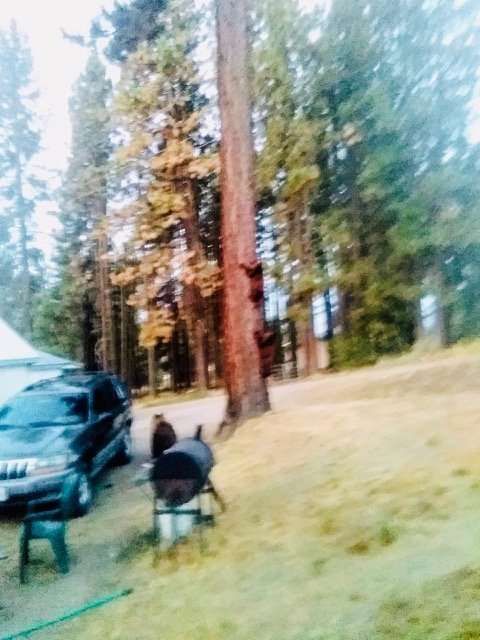 Portola resident Dennis Mitchell woke up at about 5:45 a.m. this morning and opened the front door of his East Sierra Avenue cabin to let in the cool morning air.

He made himself a cup of coffee and returned to the bedroom to enjoy his brew. Suddenly there was a loud bang and his little Chihuahua went to explore — but not for long. It soon returned and jumped on the bed, with a mama bear trailing behind.

“At first I thought it was a dog and I yelled out “Hey!” Mitchell said. “The bear stopped and started to raise up, roared, and stared at me.” The bear was a little more than 2 feet away.

Mitchell said he stared back and suddenly the bear’s face softened and became calm. “She went from mean to nice,” he said.

The bear returned to all fours and headed back to the living room, pausing to growl at Mitchell’s roommate who was on the couch. “You get out of here,” the roommate said, and it proceeded to head back out the front door with the Chihuahua on her heels.

Meanwhile two bear cubs, who had scrambled up a tree during all of the commotion, came down to be reunited with their mama, who was busy chasing the little dog around the yard. Soon enough the trio exited the yard and walked across the street.

Bears are nothing new in Mitchell’s neighborhood. There are two big dumpsters in the vicinity and bears foraged there regularly until locking lids hindered their efforts. “Now they come to the houses,” Mitchell said. “You can’t leave anything out.”

Now apparently, they are beginning to come in as well.

Mitchell said he won’t be opening his front door again anytime soon. The bang he had heard was mama bear pushing down a board that he uses to keep his little dog confined to the front porch. While it might prevent a dog from getting out; it was no match for a bear who wanted to get in.