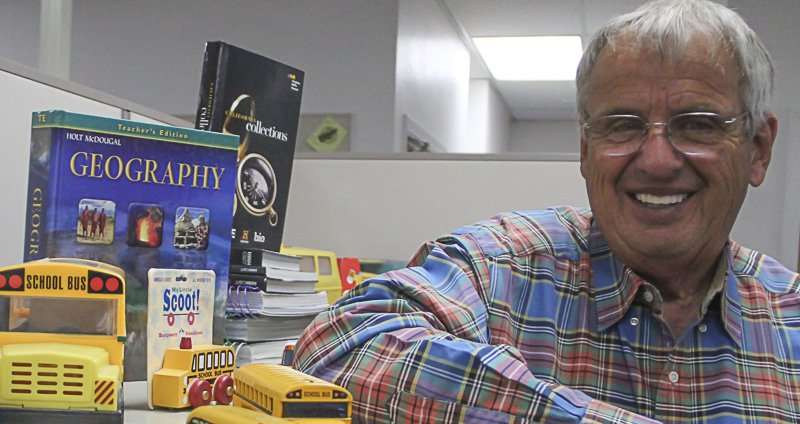 PUSD Trustee Dwight Pierson, who collects school bus memorabilia, has stepped down from the school board after several years of service to spend more time with family and his newest grandchild. Friends and colleagues with the school district say he will be greatly missed. Photo by Roni Java
News
September 22, 2020September 25, 2020 Roni Java

The Plumas Unified School District’s (PUSD) Governing Board of Trustees recently announced it would accept applications through Oct. 2 to fill a new interim vacancy on the school board.

After serving nearly seven years, Trustee Dwight Pierson stepped down from the board effective Sept. 4. He and his wife Karen are enjoying their newest grandchild, born to their youngest daughter, and his letter of resignation expressed the desire to spend more time family.

“These will be some big shoes to fill,” said School Board President Leslie Edlund as she read the letter aloud at the Sept. 16 board meeting, pausing over Pierson’s expression of the honor he said he felt while serving Plumas schools and the community.

A long commitment to education

The Piersons retired to Quincy in 2011 when Karen joined the Feather River College (FRC) Foundation where she serves as executive director. Dwight had finished up a 40-year career in school administration and classroom education, including 25 years as a superintendent of schools. He has since served with numerous community boards and organizations, locally and statewide.

Newly at home in the Lost Sierra, Dwight went to work volunteering with PUSD’s Austerity Committee after chairing the Quincy 7/11 Committee to study and recommend options for closing an elementary school, a tough project. He was elected to the school board in 2014.

Pierson once said his passion for, and commitment to, quality schools and education stemmed from having grown up with a mother who was a longtime teacher and a father who served on the local board of education.

The school board vacancy is a provisional appointment for a trustee to represent District 3 for the remainder of Pierson’s four-year term, effective until the next regular governing board election in November 2022.

– Reside within District 3, which includes the areas of West Quincy, Meadow Valley, Bucks Lake and down the Feather River Canyon to Twain.

– And may submit up to five letters of recommendation from Plumas County community members in support of their appointment. These should be included with the application.

All applications and supporting information must be filed online at

‘An incredible voice for the community’

Friendships forged during challenging times have a special and lasting bond. So it was a bittersweet moment when the school board announced the departure of Trustee Pierson.

As an elected body, they have steered the school district through past fiscal difficulties. They’ve also tackled mounting infrastructure needs that resulted in the successful passage and administration of Measure B to provide $50 million in bond monies for vital repairs to PUSD’s aging school sites.

With deep smiles and more than a few chuckles, each trustee expressed admiration for Pierson’s work and contributions and said how very much they would miss him on the school board.

“What a great experience it has been to work with Dwight!” said Trustee Joleen Cline of the Portola area. “He always has the best stories and I’m a visual person, so his stories really made issues memorable for me. It was always enjoyable to work with him, even on difficult issues.”

Trustee Traci Holt, who serves as clerk of the board and represents the Chester-Lake Almanor area, echoed Cline’s remarks.

“Yes, everything you just said,” she commented. “I will truly miss Dwight and the depth of knowledge he brought to this board. He always said to ‘Do what’s best for the kids,’ and I send all my best to him and his family.”

Trustee Dave Keller looked back to the time when he was first considering a run for the school board and said he appreciated the encouragement Pierson gave him then.

“It’s been fun sitting on this board with Dwight,” Keller said. “And what matters most to me is his integrity and forthrightness. A successor is one thing, but I don’t think we’ll ever be able to replace him.”

Trustee-President Edlund agreed with her fellow board members. “I also first met Dwight at those 7/11 Committee meetings,” Edlund said, explaining the group held many different perspectives at the outset. “What amazed me was Dwight saying, ‘By the end of this, we’ll have consensus.’ And he was right! By the end, we were all in agreement on the report.”

She further stated, “Dwight always wants the best for kids, that’s where his heart is. He’s been an incredible voice for this community and we will miss him. But I’m sure we haven’t heard the last of him!”