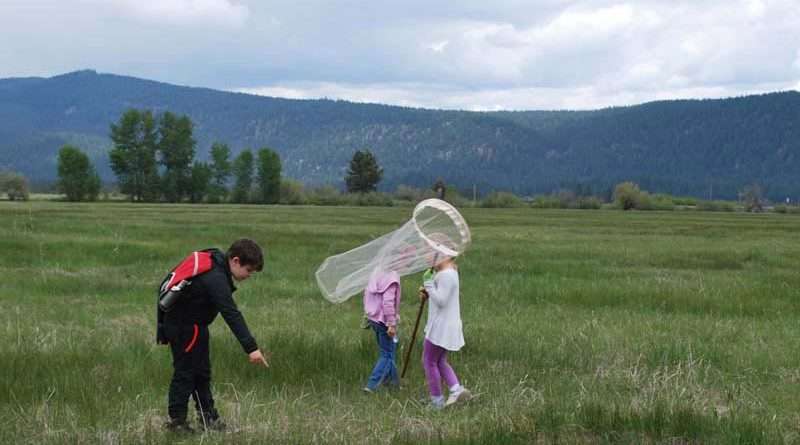 Armed with a butterfly net, kids from Chester Elementary hunt bugs in the meadow at the Olsen Barn and meadow during BioBlitz, a collaborative effort to discover and record as many living things as possible within a specified area. Photos submitted
News
July 17, 2019July 19, 2019 Stacy Fisher, Staff Writer

The Feather River Land Trust teamed up with Chester Elementary K-6 students and teachers, along with retired teachers, volunteers and local fisheries biologists, as students sifted through sediment, mud and river water May 24, and again in early June, looking for benthic (an ecological region at the lowest level of a body of water such as a lake or stream) macro-invertebrates.

The three-hour hands-on survey of life (known as a BioBlitz) at the Olsen Barn Meadow and surrounding lands near the North Fork Feather River revealed an assortment of species that students observed and recorded for a grand total of 166!

A BioBlitz is a collaborative effort to discover and record as many living things as possible within a specified area. Fifth-graders (the year of the birds) identified 34 bird species during this year’s BioBlitz.

FRLT hosted the science project as part of the Land Trust’s Learning Landscapes program, not only as a fun educational activity for Chester Elementary pupils, but also to accomplish an important management goal.

FRLT representatives said that the data collected informs the land trust about different plant and animal communities that call the property home, and provides a snapshot of what species are present in late spring.

FRLT uses this information to make decisions on when to mow the meadow, clear walking paths, if and when to treat invasive weeds, and what types of restoration activities may benefit species that populate the meadow and immediate area around the barn.

Data collected from year to year can also document change from one season to the next, noted land trust managers.

Chester Elementary students appeared deeply involved as they walked several acres armed with butterfly nets, binoculars, hand lenses and notepads, and used their science skills and knowledge that they had studied over the course of the year to observe and identify natural species, from soaring osprey to tiny mayfly nymphs, Northern rough-winger swallows, star-flowered false Solomon’s seal, orange nomad bees, stonefly nymphs, sculpin (a type of fish that dwells on the bottom of water bodies), North American beaver and garter snakes — to name a few.

The BioBlitz was a great “end-cap” to a year filled with nature and place-based learning, according to CES teachers.

To view a complete list of species observed and recorded by the students check out: www.frlt.org/news-events/news/olsen-barn-meadow-bioblitz .