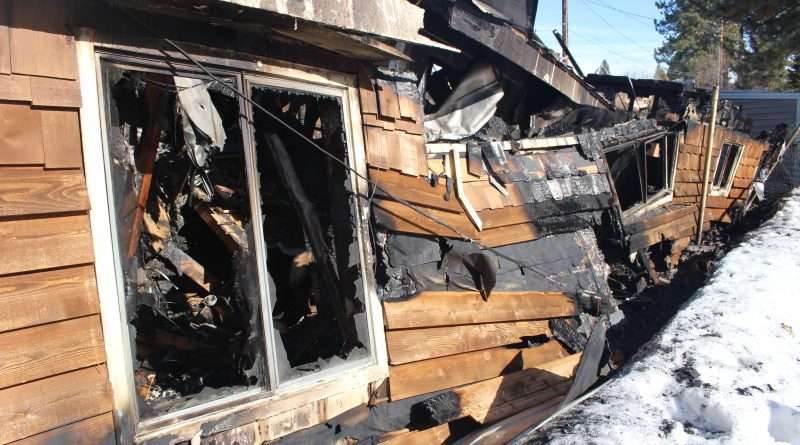 The aftermath. No injuries were reported and the cause of the fire is under investigation. Photo by Stacy Fisher
News
January 25, 2019 Editor

A caller reporting the incident said he could see the structure fire with flames visible and heavy smoke coming out of the windows.

It was unknown if the residence was occupied at the time CFD was dispatched,

There was no answer at the front door, said a witness, and it was noted the owner’s vehicle wasn’t at the residence during the house fire.

Lichti said the first unit to arrive at the scene was a Plumas County Sheriff deputy.

By the time Chester Fire truck 7261 arrived at the scene, along with three utility vehicles and nine fire personnel the structure was fully engulfed

CHP evacuated neighbors living nearby, and shut down Cross Street. Residents on First Street between Aspen and Cedar were also asked to evacuate as firefighters began the task of putting out the conflagration.

PG&E was also called in to de-energize the power lines during the fire.

Lichti said the Incident Commander first established an offensive mode, but added that after initial attempts to enter the structure were deemed unsafe, firefighters switched to a defensive mode after all residents were safely accounted for.

At 3:54 a.m., the Incident Command requested additional support from the Westwood Fire Department, which provided an engine and two firefighters.

After the blaze was fully suppressed, the incident was officially closed at 9:12 a.m. All units were released and returned to their respective fire stations.

No injuries were reported and the cause of the fire is under investigation.

Chester Fire Department personnel were dispatched at 3:21 a.m. to fight this residential fire in Chester on Tuesday, Jan. 22. Photo submitted

A firefighter begins spraying water on a house fire located at 477 Cross St. in Chester, as CHP evacuates neighbors living nearby. Photo submitted

Firefighters worked through the night into the light of morning extinguishing a blaze that destroyed a house in Chester on Jan. 22. Photo submitted

The aftermath. No injuries were reported and the cause of the fire is under investigation.