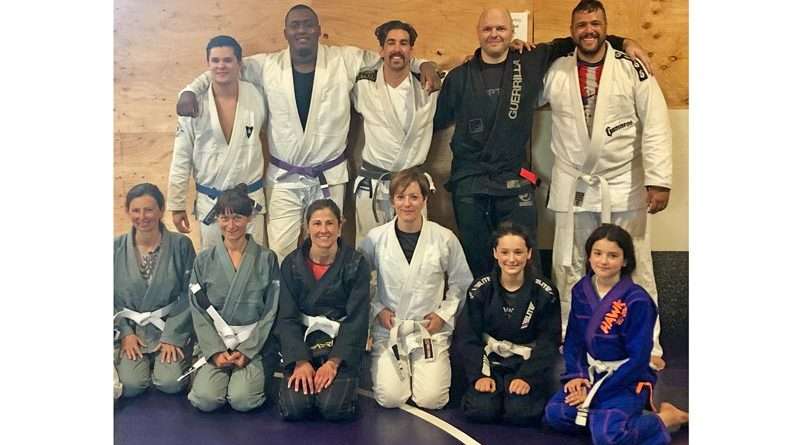 After five months of training, jiu jitsu students of all ages gathered recently for promotions at the Lost Sierra Brazilian Jiu Jitsu (BJJ) Academy in the Hub Community Fitness Center in Delleker. They came to receive one or two stripes for their white, blue or purple belts, according to their skill level.

“They love it,” a parent said while watching the children’s class afterwards, adding that the academy’s environment was really friendly and a great way for her kids to socialize and learn valuable skills.

Bret Russell, who holds a black belt in Brazilian jiu jitsu, taught the first Portola-area BJJ class last March at the gym. The class drew a lot of interest and quickly grew into an academy.

Russell is a black belt under professor Tin Gui Nha at the South County BJJ Academy in Orange County. He has opened and taught at several jiu jitsu studios, including Mangata BJJ in Ladera Ranch. Russell has studied jiu jitsu for over 16 years and taught for more than 10.

At the academy, students learn techniques to gain the advantage over an opponent in a fight and take an attacker to the ground. But in order to receive promotions, students also need to demonstrate a healthy way of carrying themselves as people. They need to demonstrate confidence, discipline and dedication.

Chad Hermann co-owns the Hub with Lance Wehrman. Open 24/7 for members, the Hub offers state-of-the-art equipment and weekly classes, several of which are included in a gym membership.

Because it takes time and focus to perform the moves, Hermann said training in jiu jitsu builds discipline. It also instills confidence and the ability to think under pressure — traits students can put to use in school and in their social lives.

Russell, the class founder, agrees. He said learning the discipline of martial arts can also help stop bullying and one of the academy’s goals is to “make the community stronger through jiu jitsu.”

Of all the martial arts, BJJ is one of the most sports-like and Russell plans to conduct a competition sometime in September with black belt Nick Maez from Quincy’s BJJ academy.

While learning how to defend against attacks and gain the advantage in a fight, students learn maneuvers similar to wrestling and compete with students of their own size and rank. It’s a lot of takedowns and escapes. Jiu jitsu can be done effectively regardless of your size.

Russell came to Plumas County to be the Beckwourth fire chief about a year ago. Six months ago, he met Chad Hermann, new co-owner of the Hub gym and jail commander with the Plumas County Sheriff’s Office. Hermann has 36 years of wrestling experience and served as a weaponless-defense instructor for 20 years.

Because of their common backgrounds in self-defense, community service and teaching, these men realized the value of providing jiu jitsu to Eastern Plumas County and worked to set it up at the Hub.

Their unique experience makes them qualified to bring BJJ to the area and recognize the positive outcomes it can have on individuals and the community.

“You can tell how healthy a school is in how much they (the students) support each other and really that is a reflection of the instructor,” said visiting black belt Scott Fritzinger who came for the promotion ceremony from Guerrilla BJJ in Reno.

Fritzinger added, “Having a black belt in jiu jitsu is rare,” and said we’re lucky to have such an experienced instructor in our community.

Russell teaches the BJJ classes with two other students, Gabe Gutierrez, who joined him from Orange County, and Adam Wolcott, a Plumas County local who trained at Guerrilla BJJ. Local instructors on the team include Tom and Melissa Klundby who have been involved since the beginning.

The academy offers classes twice a week that run from 60 to 90 minutes and will soon have a Facebook page where you can find more information.

The academy is open to students of all ages and levels. Jiu jitsu is a great way for people to train and can be done well by everyone. You don’t need to be athletic or have previous training; you’ll attain that from the classes. Kids who might not be talented at other sports like football or basketball can excel in jiu jitsu.

Since the academy is just starting up, the class fees are being reinvested to support the program and provide things like a logo and banner that should be up by the end of the month.

Instructors with Lost Sierra Brazilian Jiu Jitsu say they welcome students from throughout the community to become a part of the academy and visitors are encouraged to stop by anytime.

Fees are $5 per class for Hub gym members and youth or $10 for nonmembers.

For more information, stop by the Hub. Gym staffers are available Monday through Friday from 10 a.m. to 6 p.m. You can also email the gym at [email protected] or call 832-5599.