On Saturday, October 29, 2022, Brian Noel Lungstrom lost his fight with cancer and passed away at the age of 52. Brian attended Portola High School where he met his wife. He was known as an avid snowmobiler and was happiest in the winter on the mountain with his Artic Cat sled. He also enjoyed playing the slot machines in Reno and mining for gold in the mountains. 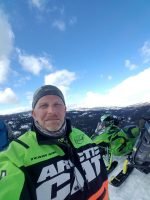 Brian was proud of his heritage as a member of the Lungstrom family, one of the original families settling in Blairsden, CA in 1911. He is survived by his mother (Sherilynn Lungstrom), his wife (Gwen Lungstrom), his daughters (Allison Wilson and Eden Molleson) and his granddaughter (Taylor Lungstrom). He was preceded in death by his father (Rodney Lungstrom), his uncles (Richard Lungstrom and Clifford Lungstrom) and his sister (Vicki Lungstrom).

The family will hold a celebration of life in the Spring/Summer 2023. An announcement will be made then, and friends and family will be invited to attend.