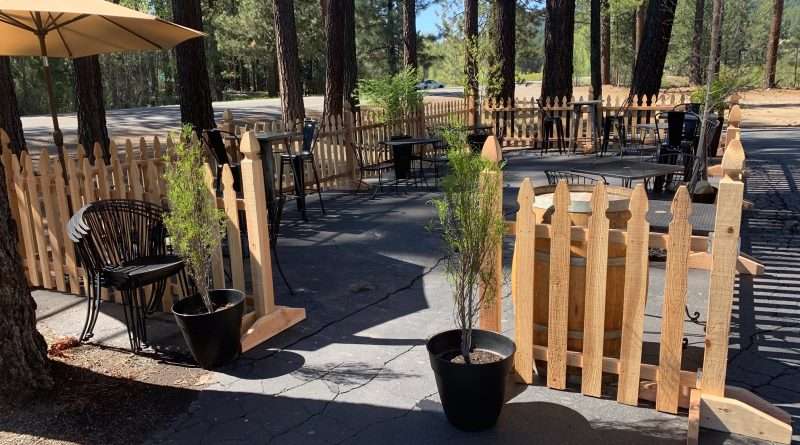 Gov. Gavin Newsom announced a statewide end to indoor dining today, leaving local establishments such as the Coyote Bar & Grill in Graeagle to rely on outdoor seating and takeout dining. Owner Terry Moore expanded into the parking lot at the beginning of the season, in addition to his patio, to offer more seating and social distancing. Photo submitted
News
May 8, 2020May 12, 2020 Editor

California has now entered Stage 2 of its stay-at-home order, which means that more businesses will be allowed to function in some manner. Plumas County Environmental Health Director Jerry Sipe said, “for us (Plumas County), this means all businesses are able to open for curbside and mail delivery.”

Some local retail businesses already have been offering curbside pickup, but it is now officially permissible for toy stores, florists, book stores and more. But what about restaurants, bars, gyms, lodges and more? It’s possible that restaurants could open for business as soon as late next week, but it could be months for the others.

Governor Gavin Newsom announced Thursday, that some regions of the state would be able to move deeper into Stage 2 if certain conditions were met — such as surge capacity, sufficient PPE for healthcare workers, testing and tracing capabilities, and consistent data that indicates no increase in cases. Counties must submit documentation of all conditions.

“Counties have go through a very onerous process,” Sipe said during an interview Friday, May 8, before they can move deeper into Stage 2. That includes obtaining letters from each of the three area hospitals, the city of Portola and the Plumas County Board of Supervisors attesting to the information.

Sipe said that the county’s coronavirus taskforce has been working on the justification for some time and would be submitting it to the board of supervisors for ratification during its Tuesday, May 12, meeting.

“Our plan is to allow all eligible Stage 2 businesses and activities except schools and daycare to open as soon as possible,” Sipe said. “That will include restaurant dining, in-store retail, and office space, but again that will not happen until next week at the earliest.” Sipe reiterated that until the “attestation,” as the state refers to this process, is completed, only curbside service is allowed.

“We are trying to get more flexibility on these Stage 3 activities, but for now they could still be months away from opening,” Sipe said. He added that the message to local lodging providers is “Currently the overnight guests can be essential workers only,” of which he said there are a number staying at local motels.

Stage 4, which is considered the highest risk, includes concerts, conventions and sporting events in large arenas.

Here is a ink to the state’s roadmap for stages of reopening: https://covid19.ca.gov/roadmap/