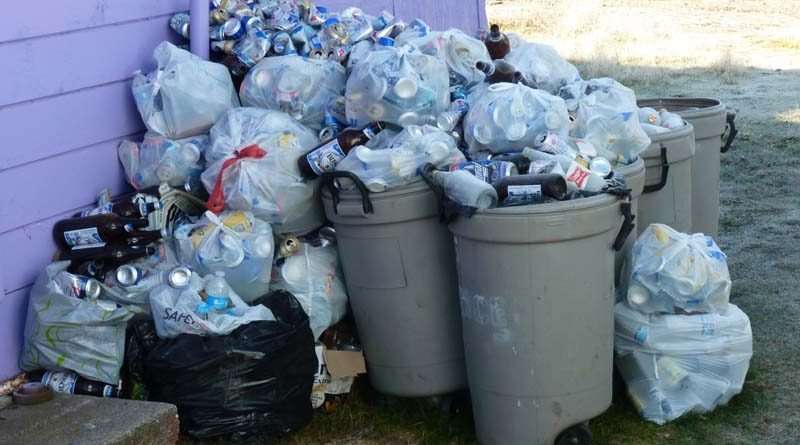 RePlanet closed CRV (California redemption value) recycling centers in Quincy and Chester in January 2016. A dramatic drop in the price of oil and thus the price of recycled plastic was the main cause for the closing of these and 191 other RePlanet CRV centers throughout California, according to a state representative of the program.

The state of California certifies the privately owned CRV centers, but does not run them or match up companies with communities. The county or individual communities might contact companies they would like to see take over closed CRV centers.

California redemption value (CRV) is the fee added to certain categories of beverage containers by the state, through the California Beverage Container Recycling Program, to discourage litter and encourage recycling. Recycling centers (called Buy Back Centers in Plumas County) are certified by the state, but are privately owned and operated.

Although CRV beverage containers can still be placed in recycle containers with blue lids for curbside recycling or taken to county transfer stations for recycling, the closing of CRV centers has reduced recycling by making it less convenient.

In addition, many low-income people rely on redeeming CRV beverage containers to augment their incomes. Currently, these folks have to store containers until they can get them to CRV centers in Delleker or Greenville.

The situation concerning closed CRV recycling centers has been discussed at Plumas County Board of Supervisors’ meetings. The supervisors decided that the CRV system is part of a state program and the state needs to fix it. The supervisors were reluctant to get the county government involved in the business of redeeming beverage containers, as it may start a precedent making it the county’s responsibility.

A state fee is added to the cost of certain categories of beverage containers, which have “CA CASH REFUND” or “CA CRV” printed on them. These fees are returned to consumers when they take CRV containers to CRV recycling centers.

Currently about 20 percent of CRV container fees are not redeemed by consumers. The percentage of unredeemed CRV fees used to be higher.

The state has gradually increased the redemption value of CRV containers, from 1 cent per container in the 1980s to 5 cents and 10 cents today, for containers of less than or more than 24 ounces, respectively.

Therefore, the value of recycled plastic has been halved in recent years. The value of aluminum and other recycled materials have also been affected.

At the same time as the value of recycled materials has plummeted, an increase in the cash return value of containers has encouraged the redemption of CRV fees. This means there is less money from unredeemed container fees to pay for administration of the program and supplemental payments to CRV recycling centers, Conservation Corps programs, etc.

State to the rescue?

California CRV recycling centers are certified by the California Beverage Container Recycling Program, but they are not run by the state.

According to Mark Oldfield, communications director for the Department of Resources Recycling and Recovery, which runs the California Beverage Container Recycling Program,  under current regulations businesses can close CRV centers with two days notice at their own discretion.

Mark Oldfield also said that the California Beverage Container Recycling Program is not set up to link companies with communities. In addition, the Recycling Program has been running a deficit the last few years because the amount of unredeemed CRV fees has dropped so its options are few.

The legislature will have to increase subsidies to CRV recycling centers, reduce the percentage of unredeemed CRV fees going to administer the program or remove the Conservation Corps or other programs from the list of recipients for the state to be able to help.

Alternatively, the price of oil and natural gas could go up relieving stress on the whole recycling system.

Bill Daw has operated a CRV center in Portola for 25 years. He said that it costs about $200,000 in equipment to get a CRV recycling center up and running, and that doesn’t include the cost of land or rent.

Daw said he has talked to Plumas County about starting a CRV recycling center in Quincy. However, Daw said that even with free use of a county building, he wouldn’t have the money to get another recycling center started today.

Daw said there are several disincentives to running a CRV recycling center. It takes Daw 30 to 45 days to fill a truck trailer full of CRV containers. However, he has to pay redemption fees to customers immediately for what they bring in day to day. Once the trailer is full, Daw has to pay $700-$800 for the trailer to be delivered by a trucking company to the Sacramento processing center. Then it takes another two weeks for the state to refund the redemption fees that Daw has paid out. Finally, the price he gets for the all the material he recycles fluctuates wildly, which greatly affects his profit margin.

Aside from all this, Daw worries that a state agent might show up unannounced to redeem CRV recyclables. Daw said that if he does not follow every regulation “to a T,” he would be left with a $5,000 fine. Mark Oldfield said the Susanville CRV recycling center was decertified/closed down because the operator had included material from Nevada in his collections. The center has been reopened under new management.

Given all the steps needed in recycling why should a person open a CRV recycling center, and why should you recycle?

Recycling helps conserve natural resources and reduces the amount of disturbance to the environment necessary to gather those resources. This is true whether it is sand for making glass, bauxite for making aluminum, oil or natural gas for making plastics or wood for making paper.

Recycling materials saves landfill costs as well. Landfills are expensive to operate. Many landfills are rapidly filling up and there is a lack of available land, near large cities in particular, to build new sites.

Trucking garbage to the Lockwood Regional Landfill, located east of Reno, where Plumas County’s and much of northern Sierra non-recycled solid waste ends up, takes a lot of energy.

Landfills also emit methane, a very strong greenhouse gas. Both the fossil fuels burned to ship solid waste to landfills and the methane emitted from those landfills contribute to ongoing global climate change.
Beverage bottles that are not recycled sometimes end up next to the side of the road, in forests, along beaches and in oceans as litter.

Some of this material never goes away. Aluminum takes centuries to break down, if at all. Plastic doesn’t disappear either; it just gets broken down into smaller and smaller pieces with unknown long-term effects.

State and local laws reflect this as they have passed laws to lower the amount of material going into landfills thus saving money, energy and reducing greenhouse gases.

2 thoughts on “Where can I take my recyclables?”