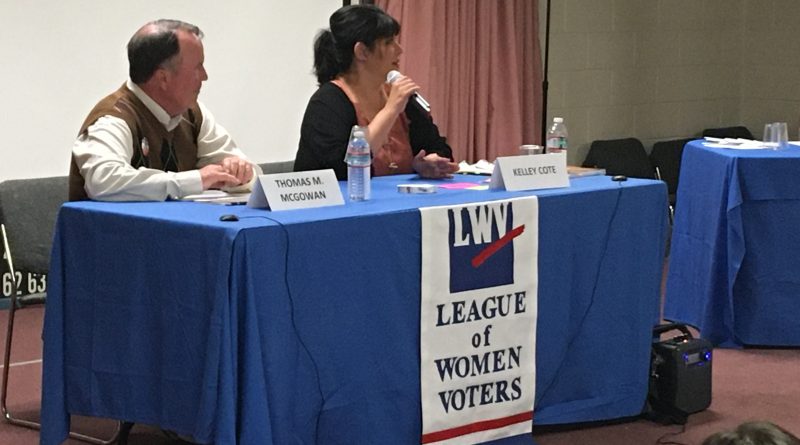 Tom McGowan and Kelley Cote are running for Plumas County Supervisor – District 3.  They were asked several questions about their ideas for the future of the Almanor Basin for which they had one minute to respond.  In a subsequent interview they both suggested the voters should go to their respective on-line sites for more information. Photo by Gregg Scott
News
May 4, 2022May 9, 2022 Editor

There was a good turnout on April 25 (75-80 residents) for the Plumas County Candidate Forum sponsored by the League of Women Voters. There were several positions to be interviewed, so time for responses to questions was very limited and numerous answers were not completed.  The contested positions of County Assessor, County Sheriff and County Supervisor District 3 were addressed separately in a quasi-debate arrangement, while the uncontested positions for County Clerk-Recorder, County District Attorney and County Superintendent of Schools were each given two minutes to describe their jobs and given an overview of their plans for those departments.

Both candidates for County Assessor currently work in that department. Amy Hendrickson is the Chief Appraiser in the Assessor’s Office and Cindie Froggatt is the Incumbent County Assessor. Both candidates have worked in the assessor’s office for approximately 20 years in different department divisions. Froggatt said she wants to see upgrades in technology that will help the process and ensure accuracy for the taxpayer. Hendrickson believes that a change in leadership will help the process.

The County Sheriff’s candidates appeared to agree on the fact that there are not enough deputies in the county and the compensation for the positions is too low. They did disagree on the best way to recruit people for those positions. Dwight Cline is in favor of offering “signing bonuses” as a method to increase the number of applicants. Todd Johns prefers recruiting and training local (Plumas County) talent that already live in the area. Johns admitted it will be a slower process, but will have a better chance of retaining the hired personnel in the long term in lieu of someone being hired for the bonus and then leaving in a couple of years. There also seemed to be some differences of opinion as to local support.  When asked about endorsements, Johns named several groups and said numerous neighboring sheriffs have endorsed him.  Cline may have misunderstood the question’s intent when he responded that every Cline sign on a lawn was an endorsement and he also included two former sheriff deputies. He also said he had the support of most of the existing deputies. Johns countered with a statement that he believed that was not accurate or a fact.

During the self-introductions both candidates, Kelley Cote and Tomas (Tom) McGowan, noted that their top priorities list for District 3 included high-speed broadband for the area and increased employment opportunities.

Cote also said she wanted to develop a vision for area growth and McGowan included economic development as an additional item.  It was noted that there has been some movement and monies committed to the broadband issue already in play for Plumas, Lassen and Sierra counties.

The two questions that required follow-up interviews with the candidates were on the subjects of economic development and time available for the candidates to do the job. The specific questions on economics was regarding the prominence of tourism as an economic factor in the future of Lake Almanor. Both Cote and McGowan agreed that tourism is a permanent part of the economic base of the area and has been for over a century.  Both also recognize that there is a need to broaden the employment opportunities. McGowan said he thinks there could be the chance to bring in new businesses if we can encourage and develop a well-trained workforce to meet their needs.  Cote mentioned that with the introduction of broadband capabilities, more high-tech jobs can be filled by folks working from home.  Over all they both agreed that tourism needs to be supported, but other avenues need to be explored.

The second question of interest was one regarding whether this supervisor position would be a full-time or part-time job. McGowan related that it would be full-time other than his other volunteer activities.  Cote explained that her statement at the forum was not complete, explaining that she decided to run at this time because of her great desire to serve and help her community prosper.  She added that as the Director of the Lassen County Department of Child Support, she is an ‘exempt employee.’.This means she is not required to be in the office, “eight hours a day.”  She also explained that the Lassen Board of Supervisors is aware of, and fully supportive of her candidacy.  She further stated that, “I am very aware of how county government works and I will devote any and all time needed to fulfill the position if elected.”  This condition would end upon her retirement in just over a year.