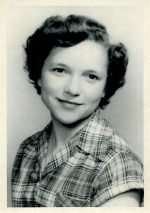 Carol Joan Kaufman Folchi passed away October 19, 2021 after a long battle with Dementia.

Carol was born in Ogen, Utah on September 18,1934 to John and Wilda Kaufman. She was the only daughter of four children.

At the age of 2 her family moved to Portola where she became a lifelong resident.

Carol was a graduate of Portola Jr-Sr high school. During her high school years Carol was involved in many activities. She loved school and to learn new things. She worked numerous jobs including tho local movie theater. She would tell funny stories about her days of walking home after her work shift and all the night life that was happening in old Portola. She would laugh and say you sure can see people in a different light when they have been at the bars all night.

During Carol’s senior year of high school she met and married a sweet young man. Albert Loui Folchi, a hard working, handsome fella, quickly won her heart and her hand in marriage. This romance endured 70 years. Albert and Carol’s love and devotion for one another was so clear, especially the last few years. At 17 years old Carol needed to have her mother’s approval to be married in the LDS church. Albert and Carol sat outside the bishop’s office in Reno, Nevada for what seemed like an eternity. Finally, the bishop and Wilda emerged from closed doors. After much conversation and pleading from the bishop who disapproved of this Catholic older man marrying Carol he gave up his fight. Thankfully Wilda did not oblige and Albert says after waiting all day, holding hands and sitting in a hallway – it took less than five minutes and they were married. He had his gal! Their journey had just begun.

At expeditious speed Carol was pregnant with their first child. Albert was off to war. Carol would speak of her time waiting and longing for him to return. She lived with her parents while he was away. She has said that was some of the most difficult times of her life. With the grace of God Albert did return to his beautiful bride and his baby girl, Jolene. With little delay they continued on their path of family. Quick note what do you get when a Mormon girl and a Catholic boy wed? You get… Jolene (Steve), Daryl (Erin), Tony (Kim), Dale (Joleen), Ben (Paige) and Mandy (Kevin). Both holding up their end of the deal of “Being fruitful and multiply.”

Carol was a full-time mother to her spunky, independent, hard working and some more than others challenging children. She became Albert’s full time bookkeeper and partner in business. She attended college classes to learn the ends and outs of accounting. She is and was just as much a part of the growth and continued success of Folchi Logging and Construction.

Carol leaves behind her love Albert, six children, fifteen grandchildren and nineteen great grandchildren. Her grandchildren will remember her as the most laid back, easy going, chatty, showtune singing grammie.

Carol was very active within the Portola community. Carol was intelligent. She loved to write and read books. She was known to have 3 books going at the same time. She loved to learn and was always full of intrigue when researching new interests. She loved crossword puzzles and was very good at trivia. She loved the arts and could often be found at the symphony, opera, broadway shows or at Ballet. Carol loved to travel and went to Europe several times. She loved to go on drives and family picnics.

She was a member of the Latter Day Saints, PTA, Nevada Philharmonic, 4H, Republican Women, Soroptimist, the Hospital Auxiliary Board and a favorite Rotary wher she was fondly known as “ Rocky”. She was a wonderful person who put others above herself.

Carol had the gift for gab. If there was a conversation to be had, a story to be told she was happy to be involved. She loved “ clicking” with someone, talking all day everyday – no forceful conversation, just natural talk that included many laughs.

She loved to shop and would somehow feel obligated to buy something from any shop owner as to thank them for her visit.

She was enchanted with all her children. Loved them all equally and was so accepting of each one’s talents and flaws. She adored her grandchildren. She could cook anything and appreciate anymeal with anyone. At family dinners she was always the last to sit down no matter how we all begged her to sit and eat.

Carol lived a full life. She loved large and lived our fathers words. She will be greatly missed and forever remembered with our full hearts.