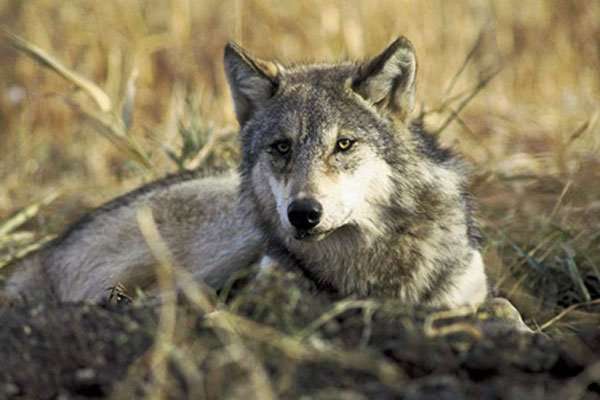 A photo of a gray wolf courtesy of U.S. Fish and Wildlife Service.
News
January 28, 2022 Editor

Here is an update on wolves in California from the California Department of Fish and Wildlife that can be found at wildlife.ca.gov/conservation/mammals/gray-wolf.

Lassen Pack
The pack had a minimum of five wolves, with one functioning collar (female LAS09F). The pack is traveling within its home range, similarly as in past years. There was a confirmed depredation of a cow and a calf in November.

Whaleback Pack
There were two adults (OR85, WHA01F), one with a functioning collar (OR85), and six or seven pups (offspring of the pair). There was a confirmed depredation of a calf in November.

Beckwourth Pack
No new information. To date, CDFW has been unsuccessful in collaring individuals and determining the pack’s reproductive status. It is possible the pack did not reproduce in 2021.

Dispersing wolves
OR93 was found dead close to Interstate 5 near Lebec in southern Kern County. A necropsy determined the cause of death was consistent with a vehicle strike.

OR103 remained in Siskiyou County during the quarter. He crossed Interstate 5 multiple times and spent much of the quarter on the west side of the highway. He had four confirmed depredations and one probable depredation involving nine injured cattle (eight calves and one adult). Two calves were ultimately euthanized due to the extent of their injuries.

CDFW has regularly detected dispersing wolves in California since December 2011. It is likely that a number of uncollared dispersers exist in the state at any moment in time. More information wolves can be found on CDFW’s gray wolf web page in a document called “California’s Known Wolves – Past and Present.”

Survey for presence
CDFW surveys areas of suspected wolf presence. Nothing new to report. CDFW continues to receive and investigate reports of wolf presence from many parts of California. Public reports are an important tool for the Department. Report wolves or wolf sign on the CDFW Gray Wolf web page: wildlife.ca.gov/Conservation/Mammals/Gray-Wolf/Sighting-Report