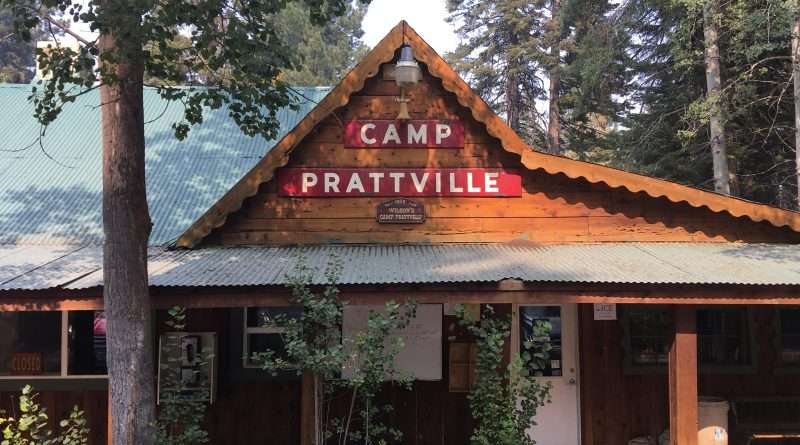 This has been a landmark sight in Prattville for much longer than 50 years, but it has been the passion of Chef Carol Franchetti since 1971. That’s right, she has been serving great comfort food to the Lake Almanor Basin for 50 years and all under the same family ownership. Congratulations! Photo by Gregg Scott
News
September 7, 2021September 11, 2021 Editor

Wilson’s Camp Prattville was established in 1928 by Frank and Nettie Wilson on the west side of Lake Almanor. As the story is told it started off as a fairly primitive retreat for folks wanting to spend some time on the lake (not many ski boats back then) and escape the valley heat. Shady campsites and a small store/bait shop created a relaxed and laidback atmosphere for visitors that were very often more like family.

How time flies when you’re having fun and suddenly 43 years later the Wilsons realized they were not getting any younger. With that in mind, in 1971 they asked their son Kenneth Wilson to come up to Lake Almanor from Santa Rosa and join them in their ever-growing venture. Having no experience in the resort business, the younger Wilson was a little hesitant to make this major career change. That uncertainty was quickly overcome when his bride to be, a young Carol Knight, agreed to join him in the venture and help him with the operations.  She, unlike Kenneth, had grown up in her parents’ restaurant and could bus tables, wash dishes, cook and serve customers with a smile on her face.

There was no established café at the resort when they arrived and in the first few years the call for prepared food was limited to a handful of requests a day that Carol cooked and served on her own.

Did I say “time flies when you’re having fun?” Suddenly, Wilson’s Camp Prattville grew and new facilities added, not the least of which is a well-established Carol’s Café.  Kenneth Wilson has passed away and his son Kenny Wilson has relocated to Lake Almanor to operate the campground and dock operations with his wife Debbie and their family.

It only takes a few more blinks of an eye to find Carol, now Carol Franchetti, with a well-known restaurant, teaching culinary arts to students at Chester High School and Feather River College as well as creating delicious meals for the Chester Community Suppers. That’s right, it is 2021 and September marked 50 years that young Carol Knight came to the shores of Lake Almanor and has shared her talents with the community.

As this reporter spoke with her, she related that she has experienced a very special life in this community. One of her highlights has been the pleasure of working with several generations of the Wilson family and the wonderful folks that frequent Wilson’s Camp Prattville. She loves the people that lives in the Almanor Basin and that’s probably why she is so involved in community events.

Yes! folks there is going to be a celebration of the 50 Years she has been with us and in typical Carol Franchetti style the event will be to support and benefit the folks in Greenville and Canyon Dam that lost so much to the Dixie Dire. The event will take place from 3 to 6 p.m. on Sept. 11 at Chester Park. It will be hosted by Carol Franchetti in partnership with Sierra Institute for Community and Environment (SICE).

There will be a barbeque buffet, adult beverages and dancing to the music of DJ Steve Lawson. Tickets are $20 per person. Admission is free to residents of Greenville and Canyon Dam with valid I.D. Private donations are also welcome and can be submitted through Sierra Institute by contacting Moorea Stout at (323) 240-7057. The venue has been moved to the Chester Park because there are over 100 tickets already sold. There will be an attendance cutoff, so get your tickets early.

To quell and rumors that may be traveling around the area, Franchetti stressed that she absolutely does not have any plans or desires to retire from serving the community as she has for the past 50 years. Her actual words were, “My hope is to continue my passion for cooking until I leave this world.”

Carol’s Café plans to be open each Friday, Saturday and Sunday for Breakfast and lunch (7:30 a.m. to 2 p.m.) from now through September, then open next spring with a more regular schedule.