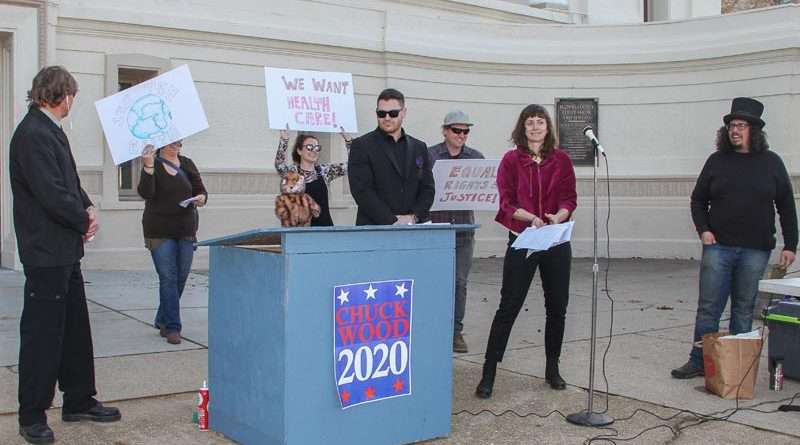 Sponsored by the Quincy Chamber of Commerce, the four-hour festival offered hearty food, crowd-pleasing entertainment and displays by local artisans.

“After some hard work and grassroots underground organizing, he’s here to announce his candidacy,” campaign manager Rebecca Glaspy said as laughter rang out through the crowd. “In all my years of working with politicians, I’ve never seen someone so willing to dig in, someone literally chomping at the bit to do the dirty work! He would never bite off more than he can chew. Vote Chuck Wood and together we can rebuild this nation from the groundhog up!”

The prognosticating rodent was described as a true American whose campaign was finally ready to surface. Wood fielded questions on the economy, health care, foreign policy and climate change.

“I promise to predict six more weeks of winter every year during my administration,” the woodchuck quipped. “That should cool things down a bit!”

New ‘mayor’ and lots of fun

“Her Honor” Jennifer Kaufmann-Ready received the 2020 key to the city from outgoing “Mayor” Michelle Fulton who announced she had fulfilled her campaign promise of free hugs for all. Fulton gave out 1,868 hugs last year and bestowed a new one on her successor.

Shoppers visited 20 merchant booths and chili purveyors; wine and beer ticket sales were brisk all afternoon. Among the entrants for the festival’s chili contest awards were:

“The Quincy Chamber is deeply grateful to every person who attended, every vendor who participated, every chili entrant and everyone who participated in the events,” Cruz added. “Each individual makes this a HUGE success and loads of fun! Thank you, everyone.”