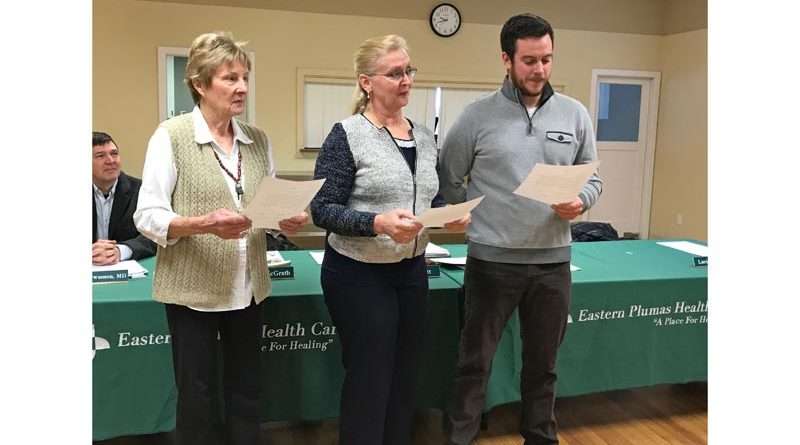 Eastern Plumas Health Care’s December Board of Directors meeting saw the changing of the guard, with long time board member Lucie Kreth leaving her post, and Teresa Whitfield coming on to the board for a four-year term. Whitefield worked previously at EPHC as chief nursing officer.

All three newly elected board members, including Whitfield and incumbents Gail McGrath and Harvey West, were sworn in by Kreth, who has also served as the board’s Secretary.

The board discussed committee appointments, with Whitfield requesting to be on the Quality Assurance Committee. This was an area she focused on in her run for the board, and also one she oversaw in her tenure here. Other committee appointments remained the same, and McGrath agreed to take over as Secretary.

Specifically, he wanted to point out to the board that EPHC will inherit a corridor that runs along Highway 395 and is “unique from a service delivery standpoint.” There are few protocols regarding who takes care of what services in this area according to Beals.

Though there are, at present, only 16 houses in this area (in Long Valley), an additional 14,000 homes have been approved within the corridor, on the Nevada side he said.

And, while the homes would not be in the annexed territory, Beals pointed out that much of that community’s recreation, Christmas tree cutting, traffic, and more would inevitably take place within EPHC’s new service area, offering service opportunities and also liabilities.

He suggested that the board might want to think about “whether or not it is feasible to serve it.” Interim CEO Jayne O’Flanagan clarified the board’s position, stating, “The board recognizes this is a Special Study area that the board will address later.”

Board ChairmanJay Skutt noted the required public hearing regarding the “reorganization” of the two hospital districts took place Monday, Dec. 10, at the monthly LAFCo meeting. That reorganization involves the annexation by EPHC of a large portion of the territory within Sierra Valley Hospital District and the dissolution of SVHD, ultimately transferring all services and assets to EPHC.

After that meeting, a required protest hearing will be held in Sierra County.

Finally, paperwork will be filed with the State, said Skutt. This will finalize the reorganization.

Bill Copren, chairman of SVHD, said EHPC has been providing all services on contract for many years. This reorganization effort is a “formality — getting rid of a hospital district that has no purpose.” He noted that EPHC currently receives two thirds of the property tax money from SVHD. The reorganization moves the final third of SVHD’s tax dollars to EPHC, “because they’re providing 100 percent of the services.”

Jerrel Tucker of JWT & Associates, LLP, presented his annual audit results, which he summed up as “good news,” at the outset. He explained that EPHC achieved an “unmodified opinion,” meaning that he found the year’s financial reporting to be accurate.

He added that there were no “reportable findings,” which means nothing was late.

Tucker went on to note that when both a new CEO and CFO come into an organization, as happened this year at EPHC, that can be a “red flag.” He noted, however, that “things went smoothly, you were well prepared … there were no problems.” He commended new CFO Katherine Pairish and Controller Janie Dikes for their hard work.

He noted that the IGT (Intergovernmental Transfer) program was continuing into a third year. IGTs are Medi-Cal payouts from the federal government that attempt to backfill for traditionally low payments for Medi-Cal patient services. (EPHC is paid approximately 15 cents on the dollar for services.) It’s a “great program, if confusing,” said Tucker, noting that EPHC was doing a good job of “squeezing out every bit you can get.”

Overall, Tucker said the hospital saw a “net bottom line of almost $1.4 million … a good, solid year.” In addition, cash on hand increased to $4 million, and accounts receivable was down by $1 million.

He pointed to some additional debt for the remodel of the Portola Clinic, including expanded clinic space for new behavioral health services and for medical services. Tucker saw this as an overall advantage since the debt is directly related to service expansion.

Further, he said the “holy grail” of collections on debt is 45 days, and EPHC sits at 44, which means that “your business office has to be doing a great job.” And, if bad debt is under 5 percent, “it’s great,” and EPHC’s is sitting at 2 to 3 percent.

Tucker summed things up: “All the numbers point to doing a really good job. Pat yourself on the back, be happy for a second, and then keep your foot on the gas.”

Interim CEO O’Flanagan reported that EPHC’s new permanent Chief Nursing Officer Sharon DiNicholas is taking over on Dec. 10. In addition, new CEO Todd Plimpton was on hand for the December board meeting. Though he won’t take the helm until Jan. 3, he was eager to get to know staff and board members alike.

Clinic Director Rhonda Grandi announced that two new providers will be starting at the Portola Clinic in January. Dr. Shruti Aggarwal is a new full-time family practice physician with over 20 years of experience, most recently at a rural practice with Lassen Medical Clinic in Red Bluff.

Dr. Sunnie Skiles will see pediatric patients one day per month initially, while still maintaining her private practice in Rocklin. She will add days as her practice in Portola expands.

The remodeled Portola Dental Clinic should reopen in February, according to Grandi. At that time, the Pine Street Clinic will be remodeled and will be a medical clinic only, with all dental moving back to the Portola Clinic.

Shawna Leal, Clinic Back Office supervisor, has been named 2018 Employee of the Year. Leal has worked at EPHC since 1990 and is very much looking forward to the parking space of her choice, a perk that comes with the Award. Clinic Director Grandi cited Leal’s dedication, adding that she “goes above and beyond for our patients and our community on a regular basis.