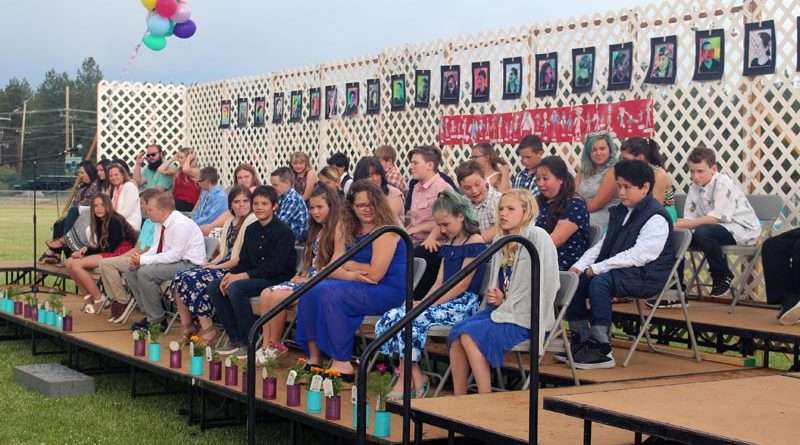 Moments after the graduates of the Chester Elementary School sixth-grade class sat down in their seats, a passing thunderstorm drenched everyone in attendance. Nevertheless, the students, parents and teachers all held out on the lawn on the sports field at Chester High despite the deluge to complete the graduation ceremony June 13, according to CES principal Alan Reeder. Photo by Stacy Fisher
News
June 19, 2019June 18, 2019 Stacy Fisher, Staff Writer

Despite a heavy downpour, the sixth-grade Chester Elementary School graduation ceremony June 13 took place in the outfield of Chester High School. Even as the passing thunderstorms unleashed a torrent of rain on attendees throughout the event, everyone continued fearlessly despite getting soaking wet, according to CES Principal Alan Reeder.

The theme of the graduation was, “Let The Adventure Begin!”

Camille Klimek provided the teacher’s address to the outdoor assembly.

A segment featured former Chester Elementary principal John Goolsby, who spoke as the “Reflections Speaker,” conveying to the students that their dreams can come true.Graduating students Marley McGreal, Alex Gaither, Brisa Bainbridge and Russell Standley read a parent thank-you, with Chase Clark, Jackson Howell and Nick Pabon set to step it up with a rap performance.

Academic and Curricular Awards, as well as the Presidential Academic Awards were given by Reeder, and Board of Trustees member Traci Holt provided Superintendent Awards.

The Presentation of Diplomas were meant to be handed to the students with the help of Reeder, Klimek and Holt, but due to the rain were distributed the following day.

Several of the teachers were also mentioned in the program sheet for their contributions in making the graduation special.