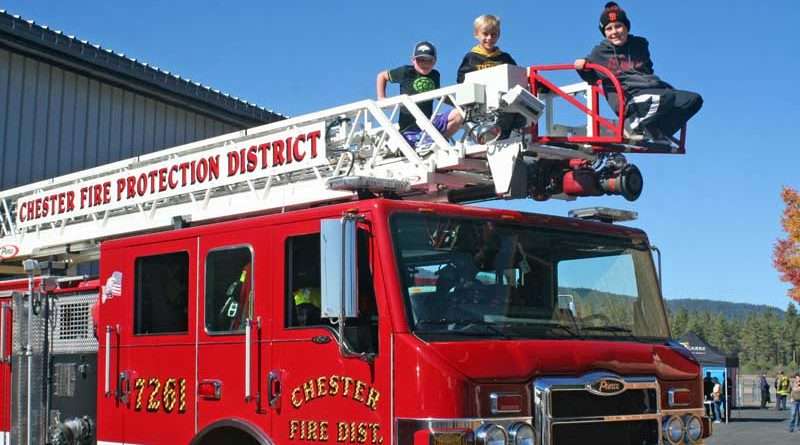 In conjunction with Fire Prevention Week, the Chester Fire Department held its open house at the fire station located behind the CPUD office Oct. 14 to invite the public to view its fire trucks up close, meet the station’s firefighters and to ask questions about the fire station’s operations as well as to tour the staff living quarters.

In addition to equipment displays, most of the CFD’s fire engines and emergency vehicles were parked outside the firehouse bay, made available for kids and their parents to inspect. The kids clearly enjoyed climbing the fire vehicles or sitting in the driver’s seats, imagining they were on emergency calls.

Parents and their children, many of whom donned plastic red fire helmets given out at the event, were treated to complimentary hot dogs, cookies and drinks like lemonade or coffee.

There were plenty of photo opportunities, a coloring contest for the children and an appearance by Smokey Bear, who was followed by the kids as he made his rounds at the station. Many of the kids took the opportunity to pose with Smokey while parents took pictures.

The theme for this year’s open house was “Every Second Counts: Plan 2 Ways Out.” The theme was in reference to knowing two ways out of every room in your house, and to practice your escape route, so if there is ever a fire you can get out quickly and not waste a second to figure out how to escape.

Several tables were set up with materials on fire prevention, including brochures and provisions for attendees to make a “2 Ways Out” safety plan to take home with them, along with free smoke detectors given to anyone who needed them in their homes.

“With the highly flammable products found in the home and office, if a fire breaks out, seconds count,” said Karen Lichti, public information officer, who helped organize the four-hour event.

She noted that materials are also available on the National Fire Protection Agency website at nfpa.org to help put together a safety plan. The planning pages are available at the Chester Fire Department as well.

Chester Fire Capt. Chris Dean led a brief tour through the crew’s downstairs living quarters, which included a flat screen TV and sofa seating, plus a kitchen and laundry room.

Lichti said the fire department planned the occasion because they wanted to show the community what a nice facility they have, and the open house was a way to invite people to tour the station and get to know the firefighters personally, adding that the affair was a lot of fun and highly entertaining, especially for the kids.

Lichti said a lot of people from the community showed up for the open house, making the event “a big success,” adding that having the event outside made for a “much nicer day compared to last year” when wet weather kept visitors mostly indoors at the fire station.

During the event, both Enloe Flight Care and PHI Cares Air Medical Flight Services received emergency calls, and the crowd of spectators got to watch the companies’ helicopters take flight from the tarmac at Rogers Field Airport.

The open house served as well to attract individuals in the community to consider applying as volunteers, which are in critical shortage countywide.