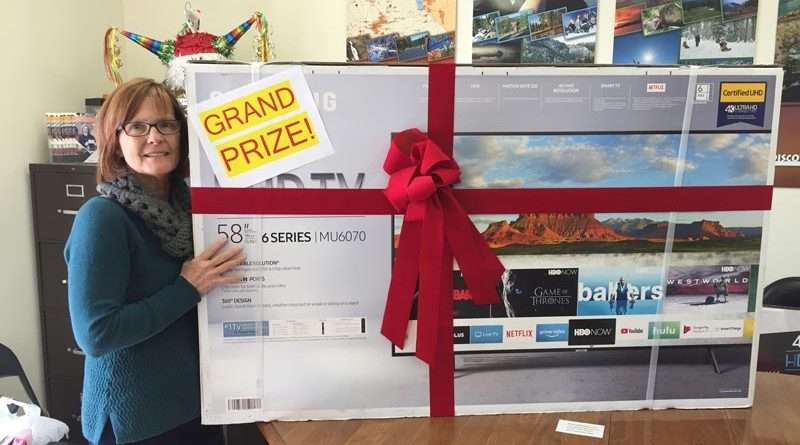 Donna Mills of the Lost Sierra Chamber of Commerce and Discover the Lost Sierra Visitor Center strikes a pose with one of many prizes on offer at the upcoming Christmas in Old Town Portola event Friday, Dec. 6, starting at 5 p.m. Photo submitted
News
November 27, 2019December 4, 2019 Lauren Westmoreland, Staff Writer

An outpouring of support from private individuals, local organizations and merchants is helping the Lost Sierra Chamber of Commerce get Christmas in Old Town on track to take place Friday, Dec. 6, in Portola beginning at 5 p.m.

“I couldn’t be more thrilled with how the community is responding,” said Donna Mills, LSCC Board president. “We have some pretty generous folks out there who have donated time, resources and funds to make this community event possible.”

Mills explained that just last week, someone who wished to remain anonymous made a large cash donation that is being put to good use, along with other contributions, to buy children’s prizes.

“A second anonymous donor gave us a new 58-inch Samsung Smart TV. It will be our grand prize at our fundraising drawing in Old Town in December. We are already selling tickets for the TV through the Chamber office on the corner of Highways 89 and 70, Gumba’s Family Pizza in Blairsden, River Pines Resort and Feathers in Graeagle, and Kathi Burton and Associates and Plumas Bank in Portola. Tickets are $5 each, or five tickets for 20,” said Mills.

LSCC actually has three drawings planned for the night of the event. One will be for the TV, one for the many other prizes available through the Chamber fundraising drawing, and one for the free “Golden Ticket” drawing for children visiting Santa in the Sierra Promotions alcove. Winning tickets will be drawn toward the end of the evening, around 7:30 p.m. and you do not need to be present to win.

“Christmas in Old Town is one of our biggest fundraisers for the Lost Sierra Visitors Center in Blairsden. The funds we raise help us keep the doors open year-round. We get hundreds of visitors each year asking for information about the area,” said Jan Tew, LSCC manager.

“The prizes we are purchasing with the donated funds are quality items people will be excited to win. We will have separate buckets for each prize. Buy as many tickets as you want for a chance to win the prize you want,” said Tew.

A few of the major prizes include bikes, trikes, a wooden snow sled, a children’s basketball set, a Bluetooth speaker, small kitchen appliances, a spa package, a Shop-Vac, a beer basket, and restaurant, lodging and propane gift certificates.

The “Adopt-a-Bear” addition is Mills’ brainchild.

“It started with two beautiful plush bears my children received and left behind when they grew up and left home,” Mills explained with a smile.

“These bears have lived a cushy, albeit lonely life these past several years. I decided it was time to find new homes for them and started an “adoption agency” to re-home plush animals. I’ve added a couple more bears to our “Have-a-Heart” foster family.”

One of the bears comes from Portola where it was the mascot at the old Ayoob’s clothing store on Commercial Street many years ago.

“Each fostered plush animal visits our spa where it is bathed, brushed, groomed and photographed before receiving its official ‘Have-a-Heart Certificate of Authenticity’ adoption form,” said Mills.

LSCC is unveiling the bears for the first time at this year’s Christmas in Old Town. Children will have a chance to win one of four bears this year with their golden ticket.

“It feels like this year will be more special than ever. We are hoping to have a great crowd turnout with all of the support we are receiving from the rest of the community,” Mills said.

Organizers are excited to have Maria Popish and Becky Stockdale lead the group in Christmas carols and a holiday sing-along from the stage in Portola’s Caboose Square this year.

“We really want this to be a family-focused event and are pulling out all the stops to make this happen,” said Mills.

“Our Holiday Marketplace is full,” added Tew. “We have 15 vendors selling food, beverages, Christmas wreaths, trinkets and gift items from 5 until 8 p.m. This is always a very popular draw for the event.”

With Christmas in Old Town a week and a half away, LSCC is still looking for parade entries to fill out Friday night’s light parade line-up.

According to Rich McLaughlin, parade organizer, unlike a daytime parade, one doesn’t need anything special to be in the parade.

“Throw some lights on your old pickup, an inflatable snowman in the bed and viola … you have a pretty classy float. You do not need a vehicle either. You can walk or ride a bike or horse, too. It’s all about having fun,” said McLaughlin, who has run the parade successfully for many years.