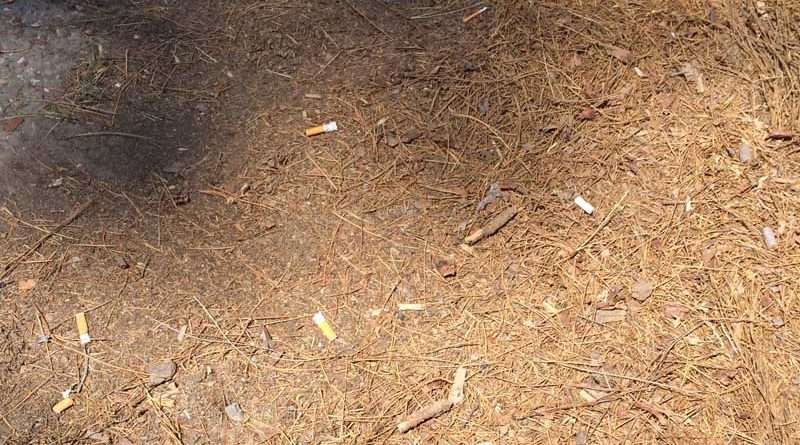 Richard Naas remembers the moment 35 years ago clearly. Mario Taddei came knocking on his door to ask him if he knew there was a fire in the ditch at the edge of his property. Fortunately, Naas had a hose at the ready and got at the fire himself. The men traced the fire back to a cigarette butt someone had tossed.

That experience informs his concern now. The other day he walked to the edge of his property on North Valley Road where it meets Forest Service land and a barrage of vehicles left daily by people waiting to be taken up the hillside for a Keddie Ridge project underway for the Forest Service. A week ago he counted 35 cigarette butts  stomped out on pine needles and gravel near the cars and a few in the ditch that once caught on fire.

“Only through the grace of God, we haven’t had a fire,” said Naas. He was nervous, too, about the drainage ditches and the tall dry grass growing out of them. “It doesn’t take much of a spark to get a fire going,” Naas said.

He did some investigating. The county is in charge of the upkeep of the ditches, but the county is busy after the winter storms fixing roads and drainages. Naas conceded the county did come out and mow back the dry brush.

James Lilo of the Forest Service has assured Naas that he will be speaking to those working on the Keddie Ridge Project to make sure they are aware of the potential danger of cigarette butts on dry pine needles.

Naas keeps the ditches on his property maintained and watches diligently for fire. He thinks both the county and those working for the Forest Service should know better.

“It’s all fire starter,” Naas said. “It wouldn’t take much.”