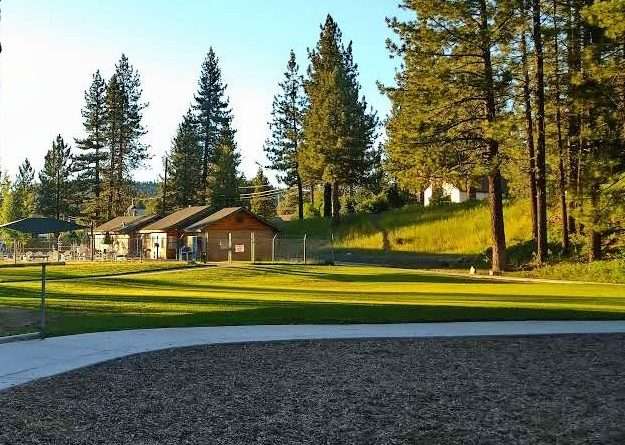 The Portola City Council has decided to move forward with plans to open its recreational facilities, including the city pool seen in the park's background. File photo by Lauren Westmoreland
News
February 26, 2021March 2, 2021 Editor

The Portola City Council met Wednesday, Feb. 24 via Zoom, with a focus on shaping the future of the city as well as keeping youth engaged in sports and the potential reopening of the outdoor facilities in the city.

The final item on the evening’s agenda probably packs the most interest for area youth. The council members discussed the opening and usage of city park facilities, including parks, baseball fields, and the pool, dependent upon the tier that the county maintains.

“Currently we are moving into the red tier, which loosens our restrictions a bit, but due to the unknowns in relation to COVID-19, staff would like for Council to discuss the desire to open or allow for the full utilization of park facilities,” Knox said.

This came in conjunction with a request from Loyalton Little League to utilize the fields in Portola, with all safety measures and modifications in place. Louis Siqueido, president of Sierra Valley Little League in Loyalton, spoke to council and gave a brief background on his request.

“The Portola Little League currently is defunct without any board members due to COVID, and without Portola Little League, we will not have any opponents for our younger teams to play. We just don’t have the needed facilities in Loyalton, but we would be happy to include the Portola kids under us for the season if it means the kids can play,” Siqueido said.

Council members urgently discussed whether it would be possible to get the Portola Little League going in time for the season again, and the logistics of following county health protocols, which include wearing masks, as well as the need for each player to have their own equipment to prevent sharing.

Alan Morton commented that he had heard that the Portola Little League was currently in the process of re-establishing the board, and all agreed that either way, all were open to Siqueido’s generous offer.

Jennifer Condliffe, manager of the city pool, also added a few ideas as to how to ensure that the pool adheres to all safety precautions, and after some further discussion around logistics, council voted by unanimous roll call vote to prepare to reinstate the public use of all outdoor city facilities.

The meeting started with council communications, with Mayor Pro Tem Pat Morton noting her attendance at a Beckwourth Fire Department meeting, as well as an ad-hoc disc golf meeting.

Councilmember Tom Cooley reported that he had attended two agenda planning meetings with a local emergency services group, as well as an infrastructure meeting with Intermountain Disposal.

Mayor Bill Powers had also attended the transportation meeting and worked with Cooley at the meeting of the infrastructure committee.

Undersheriff Chad Hermann of the Plumas County Sheriff’s Office briefly reported that things have been relatively quiet for the department in the past month, and that PSCO is working on getting maintenance issues addressed at the local substation.

City Manager Lauren Knox added that Liberty Utilities would be working to update its substation in Portola as well, and noted her work ranged from infrastructure to ongoing discussions related to the city’s general plan.

“I’m also very close to wanting to get the council members inside the Portola South Side Fire Hall now that the remodel and repair work is just about completed,” Knox said with a smile.

Knox said the City of Portola is currently looking to hire an accounting technician and that interviews will begin on Monday, March 8. “Leslie Chrysler has graciously decided to step back in during the interim while we work on the training component of the future hire,” Knox said.

“We’re very excited that he gets to attend this major program and we are beyond appreciative of the city’s help,” Miller said. After adopting consent calendar by roll call vote, council moved on to look at the records retention schedule adoption, Resolution No. 2458.

The updated policy establishes practices and procedures for the efficient and economical management of city records based on federal, state, and local statutes that govern public records. Following each record through its creation, utilization, maintenance, retention, preservation, and final disposal ensures a responsible program of records management for the city. After some discussion over verbiage within the document and the potential programs to explore for future digitization of records, Resolution 2458 was passed unanimously by roll call vote.

Council turned to the topic of General Plan 2045, with City Planner Karen Downs joining the meeting to present a slideshow of draft elements to the general plan at the current phase. “The two pieces that we are looking at this evening are the land use and circulation elements, which are two major draft elements that are currently available on the City of Portola’s website, as well as information from our Brown Bag community workshop,” Downs said.

Additions to the land use element include a needed map update that will occur after the mapping software is updated; a discussion of how the city sphere of influence is determined; and additional policies resulting from ongoing coordination with the County of Plumas.

“We are working closely with the county as they also go through the process of updating their general plan, so that way there is consistency,” Downs explained.

Other aspects of the element include garnering input from the Sierra Buttes Trail Stewardship, as well as ideas to potentially expand the Riverwalk in Portola to connect with Rocky Point Road.

“We’re also going through items such as educational facilities and locations of flood zones,” Downs added.

The circulation element would focus on updating the language related to the A-15 project, as well as updating the map to be consistent with the previous general plan update, which will remove the second bridge crossing from the map.

“We are looking at the variety of modes of transportation and how they circulate in and around the City of Portola in this piece,” Downs said. “Cars, bikes, and pedestrians; we are also looking at potentially mapping safe routes to school as well, although those are not in place yet.”

Knox then noted that due to low attendance and the need for more community input, her suggestion was to collapse the Brown Bag community workshop meetings into the community development meetings.

The item was passed by roll call vote, and council moved to the next order of business.

City Manager Lauren Knox opened the discussion by saying, “Though the office clerk position used to be a full-time position, it is currently a part-time position, with an average of 30 hours worked per week.”

Over the years, a few additional tasks have been given to the office clerk, including dog licensing and business licensing among others. Additionally, there has been an increase in demand on the position due to the additional billing and mailing process requirements prescribed by the Water Protection Shutoff Act (SB998).

“At this point, it would be very helpful to have the office clerk position become a full-time position, to provide the staff with additional resources to complete not only the tasks that are already present, but to also aid in ensuring items are kept up to date and responses to requests are made in a timely fashion.”

Knox added that staff had decided to bring the item forward right away instead of being part of the budget discussion for the next fiscal year, due to the upcoming transition to fulfill the accounting technician position. “Having the office clerk be full time would help to increase training opportunities for whomever fills the position, as well as easing the onboarding time period,” she said.

City Finance Officer Susan Scarlett noted that she would not be looking for a budget amendment at this time if council moved forward on the request. After some discussion, all council members voted to approve the request unanimously.