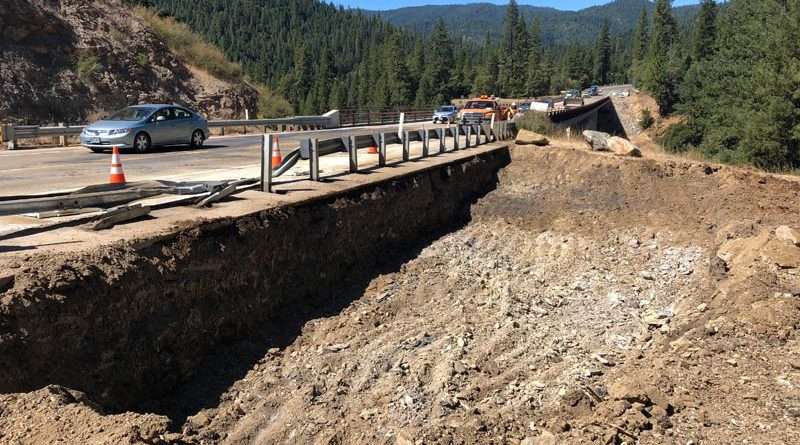 Speed and winding roads might have had something to do with the overturning of a fully loaded fuel tanker and trailer that crashed after 8 a.m. on Sept. 14 near the Spanish Creek Bridge on Highway 70 near Keddie.

The tanker truck incident immediately closed Highway 70 in both directions. The highway wasn’t opened again until fuel retained inside the two tankers was offloaded and the rig was removed from the site.

What spilled was approximately 1,000 gallons of gasoline and 3,100 gallons of diesel, according to Jerry Sipe, Environmental Health director.

Precautionary booms were established around the location of the spill to prevent any hazardous fuels from entering Spanish Creek, according to Sipe.

But the design of the new bridge helped prevent the leaking fuel from entering Spanish Creek, Egide told supervisors. The California Department of Fish and Wildlife and PG&E representatives arrived at the scene to help protect the waterway.

“The well at the nearby campground (Spanish Creek) will be sampled and returned to service,” Sipe explained.

The trucker/shipper’s consulting firm, Apex Environmental, was responsible for having primarily soil excavation conducted, Sipe said. Its crew was working on backfilling the area along the southeast side of the bridge abutment. The trucking company is also responsible for all costs associated with the incident, he explained.

A large section of possibly contaminated soil was removed from the northern side of Highway 70. Excavation was approximately 60 feet by 45 feet wide, with a varying depth of 10 inches to 4 feet deep. A secondary excavation was conducted on the southeast side of the bridge. This was approximately 50 feet by 3 feet and about 1 foot deep.

“Some cleanup of absorbent remains to be done of the north end of the bridge,” Sipe told the board Sept. 18. “But most likely fuel that spilled here was captured in a cement-lined drainage ditch and did not impact the soil.”

Approximately 300 yards of contaminated material was removed from the area of the spill, Sipe said. An area near Spanish Creek Campground housed 10 20-yard rolloff style bins to hold the soil.

These bins will remain in place until sampling is finished and crews know where to dispose of materials.

Sipe said that this portion of the cleanup would be completed during the week.

Egide told supervisors that asphalt from the site would also be tested and removed as necessary. This part of the task could take up to two weeks, he said.

“I understand that Caltrans is requiring the impacted pavement be replaced on the south end of the bridge,” Sipe explained Sept. 19. “And this work is scheduled for Tuesday of next week.

Sipe went on to say that the guardrail heavily damaged during the crash will be replaced. For now, K-rail concrete barriers will help keep traffic between the white lines.

Some further erosion control with jute netting or straw wattles will be placed readying the site for upcoming rainy weather, Sipe explained.

Supervisor Michael Sanchez asked Egide why a fully loaded tanker was traveling from Reno. To his way of thinking fuel supplies are in the Bay Area so the truck should have been traveling in the opposite direction.

Egide explained that there are fuel suppliers in Nevada and shipments can go either direction.

By 11 a.m. Wednesday, Sept. 19, the excavation was backfilled, Sipe said. Large boulders were moved to the top of the bank to help stabilize the edge and final grading of the area was completed.

As the driver exited a curve the rear trailer tipped over causing the entire truck and trailer to slide sideways across the highway. The cab of the Peterbilt ended up against the mountainside. The remainder of the truck and the trailer stopped across both lanes of Highway 70.