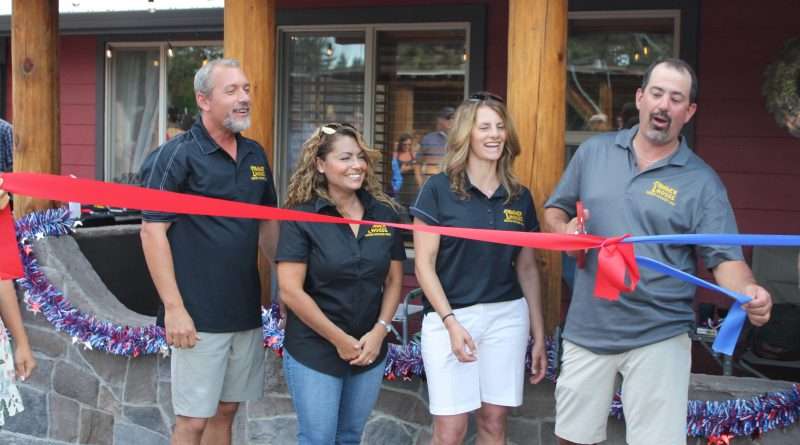 Owners of the new Timber House Lodge and Brewery, from left, Berton & Carol Bertagna and Toni & Robert Valella are enjoying every minute as they cut the ceremonial ribbon for the Grand Opening of the lodge. The families have been coming to Chester for many years and said they feel like they are a part of the Basin Community and look forward to being here for a long time in the future. Photo by Gregg Scott
News
June 26, 2020June 28, 2020 Editor

A long idle landmark in Chester is once again joining the active community. Thanks to the efforts of Robert and Toni Vanella and partners Berton and Carol Bertagna, The Timber House Lodge and Restaurant are once again coming to life.

These two families have been coming up to Chester since they were very young and have fond memories of the glory days of the aptly named Timber House and after many months of planning and work, they kicked off the beginning of a longtime dream of rejuvenating the historic location with the Grand Opening of the lodge portion of the site.

The lodging features nine rooms and a large suite, each one with its own theme décor. Lodgers may choose from Hook, Line & Sinker; The Cowboy; Rebel Heart; Gypsy Soul; Winter Wonderland; Wild, Wild West; Buck Wild; The Rancher or the Lumberjack Suite as a surrounding for their sojourn. Reservations are available at [email protected]

The restaurant, built in 1962, has been completely stripped to its original interior and represents half of the next phase to restore the site to prominence in the community. Along with a brand new brewery/distillery building the remodeled restaurant will hopefully be up and serving sometime next summer to early fall.

To celebrate the Grand Opening, the Lake Almanor Area Chamber of Commerce hosted a ribbon cutting ceremony that was attended by a large crowd of local well-wishers including 2020 Grand Marshall John Sypher. Since this year’s Fourth of July festivities have been canceled, it was an opportunity to Sypher to be recognized as well.

Attendees were able to sample some of the beers that will be served and check out the attractive décor available in the rooms.