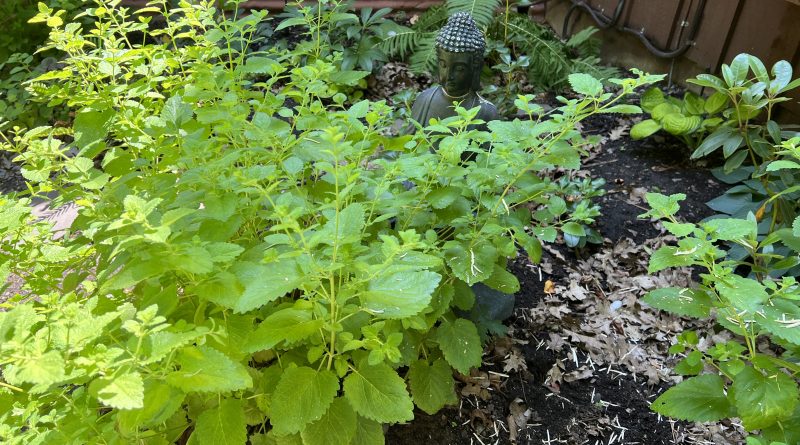 We all need moments of peace in our lives. Columnist Pamela Noel turns to this corner in her backyard. Photo by Pamela Noel
Community Green News Opinion
July 12, 2022 Editor

Some shoot up like swords, stretching every fiber to the sky.  Others dip their tips down towards the earth, a slight humility that invites us in.  Every plant in this garden has its own appearance, its personality, its beckoning or repellent nature. 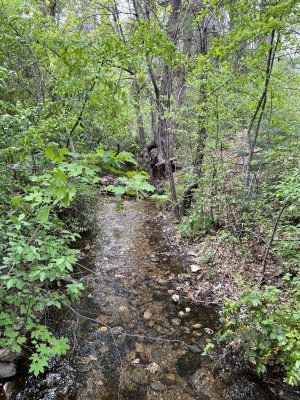 I  sit in the garden, using all my senses to gain a deeper understanding of nature—an understanding of feeling, aesthetics—almost a visceral understanding that leaves me feeling better than when I first entered the garden. It can even give us the quiet and space to understand ourselves, engendering health, calm, and an ability to dwell in our own quietude within.  A garden is a companion, an enduring friendship that benefits from a mutual relationship—giving and taking—the exchange of human and plant energies. For those who sit in silence and openness it can restore and refresh.

My father was an admirer of the Findhorn gardens in Scotland.  As a child I would listen to his stories of the garden devas, mysterious fairies in the garden who responded to the energies of all inhabitants in the garden. I would come upon him talking and singing to the plants here.  And they seemed to respond. They were beautiful, large, healthy, and prolific.  Rarely did any perish from his touch and care.

When pruning a shrub or tree, he would invite me to poke my head into the center of the plant, and ask me to imagine I was that plant.

“If you were this tulip tree, where would you want to grow?  How would you want your branches to extend?”  He had me touch the branch that I spied and tell him which direction I felt it wanted to grow.  In the same way he would ask me who (what branch or twig) would be getting in the way…and that would usually be pruned.  Thus, he taught me to feel nature in the garden as a dynamic and ever changing process in which we were a part and partner.

He would invite me to graze as an animal would…saying that I could eat anything vegetable or fruit anytime day or night.  He also showed me the flowers I could munch — daylilies, columbine, violets, and honeysuckle (to be sucked).  In addition he explained what weeds I could eat, if times became challenging—purslane, dandelions, sour grass, miners lettuce. He showed me the rich, sweet smell of humus and compost, saying that it was plant’s equivalent of candy.  As a child I could understand that comparison.

He helped me to develop not only an appreciation, but a need to create gardens.  And he would say that whenever I was without, and felt the need, to wander into a park or forest.  Here nature would give me  some of the same gifts.  It would hold me as part of its own, as long as I respected it, and entered into it with tenderness and appreciation.

So as I look around my garden this morning, I realize it is all perfect and functioning here.  The plants and soil know how to be together.  The mutually chastising squirrels and blue jays have their parts to play.  The skunk wanders out from under the house at dusk, sniffing his way along his nightly path.  A racoon wanders onto the deck.  All manner of inhabitants join me in this garden.  We are all part.  We are all necessary.  It’s a beautiful place.