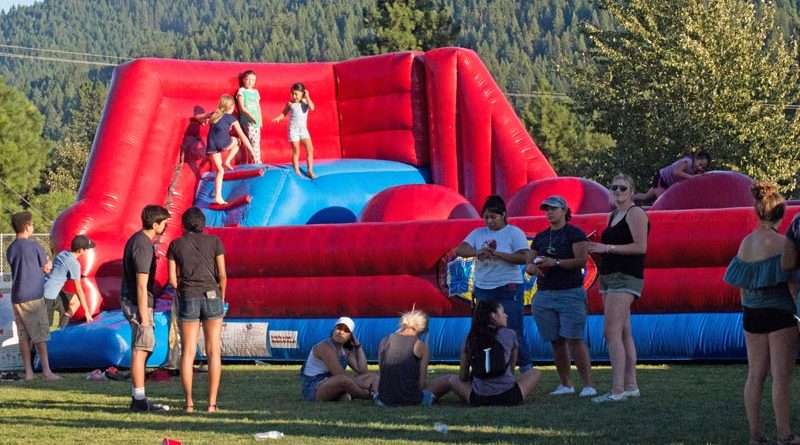 Inflatables, fun, and FRC baseball and softball will be just some of the activities open to the community April 12, from noon to 2:30 p.m., when the college hosts a Celebration Day to honor 30 years as an independent community college district. Everyone’s invited. Photo submitted
News
April 11, 2019April 10, 2019 Carlie McCarthy, Special to Feather Publishing

The 2018-19 academic year has been a year of celebrating Feather River College’s 50th Anniversary and our successes along the way, as well as the bright FRC vision for the future.

Events over the last few months have provided students, staff and the community with opportunities to enjoy FRC’s 50th Anniversary motto of “Continuing a Tradition of Excellence” and now we have a new occasion to mark — 30 years as an independent community college district.

FRC invites everyone to join us at noon on Friday, April 12, when the college will host the FRC Celebration Day.

The date was selected because on April 14, 1989, the college held ceremonies to celebrate FRC’s new independent status as the 71st community college in California.

The college first opened its doors in 1968 as part of the Peralta Community College District.

The Feather River Bulletin wrote about our new independent status at the time, stating it took 10 years, three bills and 15 committee hearings to gain independence as a one-college district.

“The college owed a great deal of thanks to then-FRC President Joseph Brennan,” Trutna said. “Being an independent college, FRC has its own locally elected Board of Trustees. The California Community College system has now grown to 114 colleges. While FRC is the second-smallest community college in California, we are well-known throughout the state for our top-notch education in service to Plumas County residents.”

Joseph Brennan started with FRC originally as our Dean of Student Personnel Services. He became president in 1979 and retired in 1989. He still lives in Quincy and was featured in the 50th Anniversary video on the college’s website: www.frc.edu/50 .

The Celebration Day event is an opportunity to engage the campus and community in honoring the accomplishments of FRC and we will be integrating this social occasion with our popular annual Cultural Fair.

At noon, FRC will host double-header games for baseball and softball.

From 1 to 2:30 p.m., students and staff will represent their culture and the diversity of the college with booths highlighting special foods and fun facts about their home countries and regions.

There will also be a free barbeque and inflatable activities including a mechanical bull, music and entertainment, plus representation from academic programs, student clubs and sustainability demonstrations.

We hope the community will come out to celebrate the accomplishments of your local college and catch some Golden Eagle baseball and softball.

Activities will be set up on the field between the baseball and sand volleyball areas. See you there!