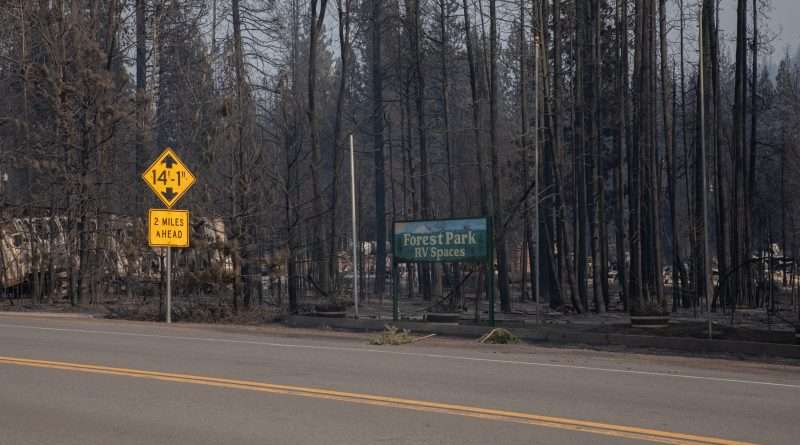 Charred trees stand along the side of Highway 89 at the site of the RV park. Photo by Shawndra West
News
August 10, 2021 Editor

Tonight’s much awaited community meeting designed to feature information on the West Zone did not deliver —poor connectivity left the live stream largely indecipherable. Residents are clamoring for specific information about communities, but didn’t receive that tonight.

The written update that was released this evening provided some general information, but not the town-by-town data craved.

On the West Zone, crews worked aggressively throughout the day to extinguish hot spots and improve containment lines. Heavy smoke settled in the area reducing visibility. High temperatures, gusty winds and dry vegetation still have the potential to fuel fire growth. Weather is forecasted to become hotter and dryer with isolated thunderstorms late in the week.

Plumas News will work to provide more information for the Plumas County communities on the West Zone that are impacted.

On the  East Zone, crews encountered increased fire behavior in the northeast perimeter by Coyote Peak, China Gulch, and Dyer Mountain when temperatures rose, and the southwest afternoon winds returned.

Luckily on the East Zone, residents can view the briefings by Operations Section Chief Jake Cagle to learn the latest information. Cagle reported that the Silver Lake area (which was a problem for a long while) is doing well and the entire southern perimeter to Crescent Mills is holding within its footprint. This includes the Canyon communities, Bucks Lake, Meadow Valley, Quincy and East Quincy, around to Crescent Mills.

Then the situation changes. Cagle reported that the fire came across the dozer line in Hunts Canyon earlier this evening and is backing down the hill at a slow rate of spread.

Work continues around the Lone Rock area into the Sheep’s Fire scar, to keep the fire from spreading toward Janesville.

He addressed Diamond Mountain Road, where there is believed to be some structure loss and he said assessment teams will be in the area.

Cagle addressed comments about the lack of firefighters visible in some areas such as Crescent Mills and Greenville. He said crews don’t sit idle, rather the resources are being put where they are most needed.