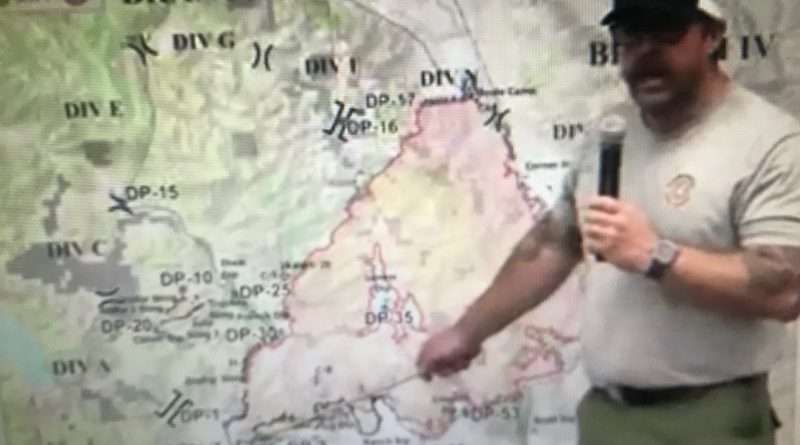 Jake Cagle, system operations chief for Incident Command Team 4, updates the public about the status of the Beckwourth Complex during the July 11 nightly briefing. He is pointing to the area where the Sugar Fire originated July 2.
News
July 11, 2021 Editor

Tonight’s briefing from incident command on the Beckwourth Complex brought some good news: the fire is 86,076 acres and 20 percent contained.

“We had a very successful day out there today,” said Jake Cagle, system operations chief for the command team the evening of July 11.

He gave a rundown of the day’s activities. The southern edge of the fire is looking good as crews continue to mop up the Maddalena area and there is dozer line established to  Frenchman Lake Road.

“Up toward Scott road, crews went direct on this piece, close to the fire line with aerial reinforcements,” Cagle said. On the eastern edge of the fire, dozer line and hand line are running parallel to Highway 395. “Night shift will continue direct line,” Cagle said.

The situation changes for the fire in the Constantia area where there was a lot of wind and a lot of spot fires today. There are also a lot of structures, and Cagle said the crews are doing their best to protect them. It was the the volatility of this area of the fire that prompted the closure of Highway 395 off and on today, and forced Plumas Sierra Rural Electric to de-energize power lines for a time. Cagle said that he expects the power to stay on and the highway to stay open over night unless something dramatically changes.

But the bad news is that the Beckwourth Complex is now competing with other fires for resources. Some air tankers were diverted to Shasta National Forest today as that fire became a priority.

Another area of concern is between Dixie and Doyle Grade. “Crews will try to get in there direct,” Cagle said. Continuing down the west side, Cagle said that Table Mountain and heel of the fire remain cool.

Crews continue to monitor the Dotta Fire, and it remains in its footprint.

A community meeting is planned for Monday evening at 7 p.m. and will be broadcast live on the Plumas National Forest Facebook page.