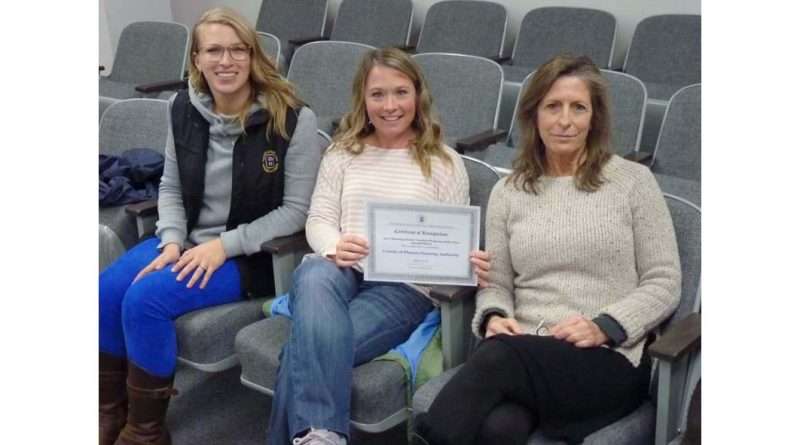 From left, Emma Miravalle, Heidi Crump and Jacky Trotter display their award from the U.S. Department of Housing and Urban Development for Housing Choice Voucher Program of the Year. Tania Nesbit, another member of the Plumas County Community Development Commission Section 8 team that received the award, was not present for the photograph. Photo by Steve Wathen
News
March 6, 2017March 2, 2017 Steve Wathen, Staff Writer

The Plumas County Community Development Commission and Housing Authority received an award from the U.S. Department of Housing and Urban Development for “Housing Choice Voucher Program of the Year” for small housing authorities in HUD Region 9.

This was first time anyone could remember Plumas County receiving this award.

“It was a big thing,” said Roger Diefendorf, executive director of the housing authority.

Diefendorf and Shawn Montgomery, finance director of the housing authority, were generous in their praise of their four-woman Section 8 team. “There is a lot of bureaucracy they have to deal with.”

Each housing authority is given a fixed number of housing vouchers. At the end of the year, they can’t have given out any more or any less vouchers. This is not an easy thing to do, as people come and go in the four counties they administer.

Many housing authorities are off their quota by 30 percent or more. Plumas County was within one-half percent of its target.

Larry Douglas, advocate and watchdog, declared, “Section 8 is a tremendous win-win for both the landlord and the tenant.”

The staff of the housing authority also helps to provide energy assistance and weatherization services, build and improve infrastructure, support the creation and retention of jobs and support human services organizations.

Montgomery noted, “We have a lot of little things that we do that we hope are good for the community.”

The commission also discussed also discussed the Tobin Pipeline Project funded by HUD. Tobin is located in the Feather River Canyon about half way down the canyon to Lake Oroville.

Forest fires burned the area in 2000 and 2008, destroying the single pipeline used for both potable water and fire control.

HUD gave the county $1.2 million in 2010 as a community block grant in order to design and replace the pipeline, as well as to drill wells and build a 60,000-gallon water storage tank in Tobin.

For reasons that weren’t clear to Diefendorf, who has only been in his position for two years, construction of the new pipeline did not begin until recently.

The contractor began moving heavy equipment into the area just before heavy rains closed Highway 70 through the canyon.

Diefendorf believes the contractor will finish construction of the pipeline by June of this year or earlier.

Approximately a dozen people live in Tobin now. It was reported that Tobin was something of a tourist attraction in the past. People from the Bay Area would arrive at Tobin at 10 a.m., go fishing and then return to the Bay Area in the afternoon.

The Community Development Commission has not applied for any new community block grants from HUD.

HUD is supposed to be coming out with new guidelines for community block grants but the commission is taking a wait-and-see approach. Montgomery pointed out that, “It could make things worse.”