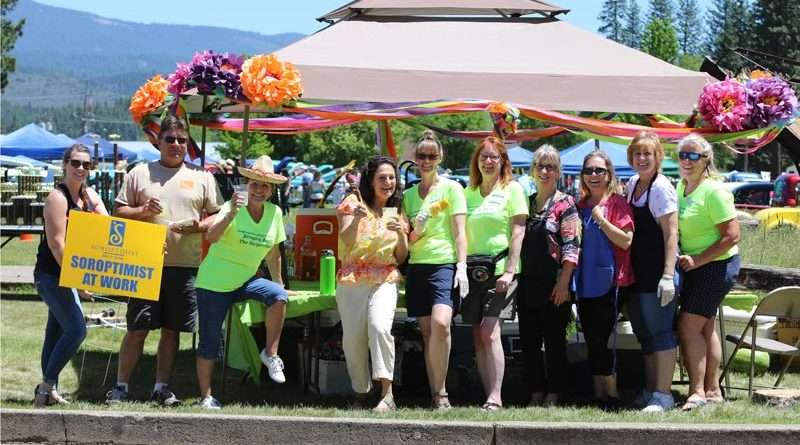 Numbers were up for just about every aspect of the 2018 County Picnic. “The vendors are up, the cars are up,” said Fair Manager John Steffanic, “and we had double the attendance at last night’s drive-in movie. Even the Lion’s Club Pancake Breakfast was up.” Picnic folk neared 1,100 by early afternoon, besting past numbers of almost 1,000 by the end of the day. “I think this is the best in at least 10 years,” said a former Sweetheart of the Mountains Nancy Gambell.

The 2018 Sweetheart contestants, Grace Bristol of Portola and Becca Leonhardt of Quincy, were joined by 2017 Sweetheart of the Mountains Madeline Williams of Loyalton while they waited for the announcement of who would wear the 2018 crown.

At 2 p.m., as promised, Steffanic, Gambell and the three young ladies assembled on stage to draw the attention of the crowd. Portola’s Grace Bristol was announced by Steffanic and crowned 2018 Sweetheart of the Mountains by Williams.

George Scheuchenzuber, aka George the Barber, raised funds for the Plumas County Museum and the fairgrounds for the fifth straight year. It all started in 2014 when Scott Lawson, long-time museum director, agreed to get a haircut from George. “It was the first time I had a buzz since I was a kid in 1964, 50 years,” said Lawson. He says he never got another, but people have been paying George to buzz their head at the County Picnic’s makeshift gazebo barbershop to raise money for the pair of entities ever since.

“We have more (money) than last year already,” said George, “and we still have two hours left.” Chad Rathjen serves as support crew for the fundraiser every year. “Chad raised half the money … and he carries in the chair,” said George. That would be important.

There are a group of folks that annually support with money and company, “It’s about everybody that keeps helping every year,” said George. But you know what they say, hang around in the barbershop long enough, and you’ll get a haircut. That’s how it was for Bob Battinger. George said he would pitch in $50 if Bob would get a buzz cut, and Bob went for it. “He was brave,” said George. “He was very brave.”

Speaking of brave, 6-year-old William Henry Wilcox showed up ready to compete in the “Sound Off” portion of the big County Picnic Car Show. He and his dad William mounted a very loud truck horn to his little red wagon. The pair also work together raising chickens as Circle “W” Ranch. “We raise chickens to give eggs to the Crisis Center on a regular basis,” said Wilcox.

When the time came for the Sound Off competition, “He has to step up with the big boys,” said papa Wilcox. Little William wore a very serious face. Engines revved and little Wilcox blew his horn. Kids jumped and covered their ears, smiles and grins covered the faces in the crowd.

A 1965 Ford Falcon owned by Terry Jenkins of Paradise won. “This is one of my favorite shows,” said Jenkins. “I’ve been coming to it since 2009.” The winner was chosen by audience applause, and although not a science, it sounded like little William came in second. “Maybe next year there will be a junior class category,” said Wilcox.

Indian tacos, margaritas, Debbie Dogs, fresh lemonade, BBQ and burgers were all on hand. The kids’ bounce house was a really big hit. The line persisted through the heat with jumping excited children waiting for another turn in the big air-filled house. There was also a tall, inflated tower to climb outside from which kids could safely fall. Fun.

Friends of the Library were on hand. “The main purpose is to give away children’s books,” said volunteer Karen Jaggard. The group is plugging a Seed Library event Sunday, June 10, from noon until 2 p.m., at the Quincy Library. Attendees will leave with free seeds and info on how to grow garden plants and save their seeds.

Considerable amounts of hard work go into pulling off an event of this size for the county. Every one does their part. “I bought one drink from every vendor,” said county mover and shaker and general do-gooder Lisa Kelly, co-owner of Moon’s Restaurant.