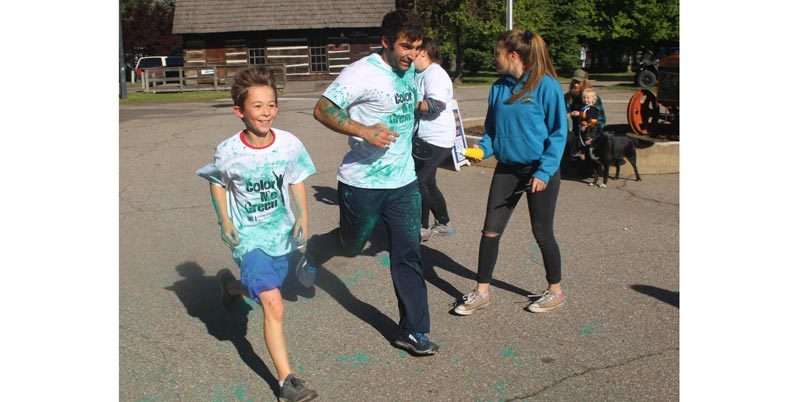 Cooper Driscoll, left, and Andrew Patota pace each other in first and second place after loop one of two around the fairgrounds in the 4H 5k run June 1. Photos by Mari Erin Roth
News
June 12, 2019June 7, 2019 Mari Erin Roth, Staff Writer

The Plumas County Picnic kicked off at 7:30 a.m. June 1 with the traditional Lion’s Pancake Breakfast.

“We go through boxes and boxes of these,” said Sheriff Greg Hagwood as he browned sausages from a 10-lb. carton at the grill. The line was steady as Lions volunteers flipped pancakes and served up breakfast for the hungry crowd.

The next item on the docket was a double loop around the fairgrounds at 8 a.m. for the 5k run hosted by 4H. The moniker was “Color Me Green” and that is just what happened to participants in the race!

Organizer Kari O’Reilly made sure runners received a white logo T-shirt that was eventually sprayed liberally with non-toxic green powder by volunteers stationed at various places along the fairgrounds course.

The run took about an hour, leaving just enough time for the athletes to slide in to pick up their own stack of pancakes from the Lions fundraiser.

A fine selection of classic cars filled the fairgrounds along with vendors and non-profit groups for a day of county fun.

For the first time, Fairgrounds Manager John Steffanic booked a band for the event and they were a hit! The band Déjà vu played classic tunes and kept the crowd dancing throughout the day. “This was the best county picnic ever,” said Steffanic, who is kind of famous for his positive take on every event at the fairgrounds. It certainly wasn’t the biggest county picnic we have had, but it very well may have been the most fun.

Another first for the picnic was a special concert on the Old Town Stage of current Quincy High School and Alumni members of high school bands. Former Sweetheart of the Mountains, Nancy Gambel, organized the performance of the Alumni Band that was well received by folks enjoying the shade in Old Town along with Indian Tacos, Bloody Marys and Margaritas.

A hoola hoop contest had folks swinging their hips while the clouds provided periodic shade but not a single drop of rain to mar the perfect polish on the high gloss of the classic cars on display.