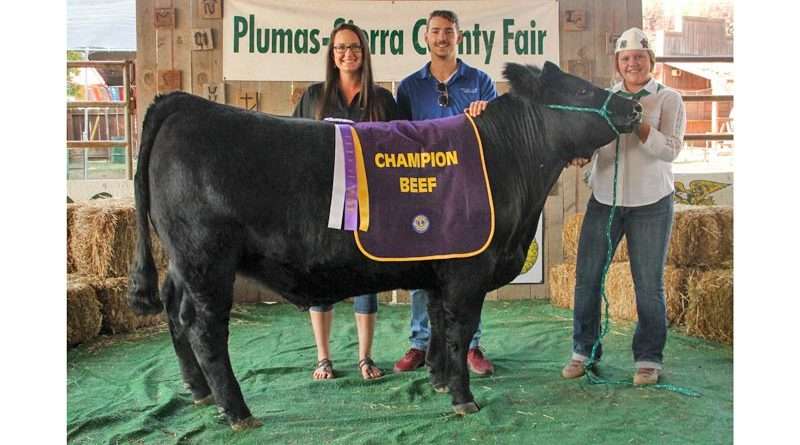 There is little doubt that for some of the hard working youth  — who represent the Plumas and Sierra counties’ 4-H and Future Farmers of America programs — the annual livestock auction can be bittersweet as their summer-long efforts and attachment to their respective animals comes to an end when they are auctioned off at the annual Junior Livestock Auction held Sunday, Aug. 12, the final day of this year’s Plumas-Sierra County Fair.

But when the stands are full of generous buyers — both individuals and business owners — who this year collectively spent an impressive $246,196 (not including price bumps) on 121 animals, it quickly seems to make it all worthwhile.

Going above and beyond

As they have done for years, Dr. Steen Jensen and Dr. Chris Kennedy guaranteed the price for goats at $14/lb. and bumped the sheep up to $7/lb.

Showing lots of support again this year was Christian Palmaz, representing the Palmaz family who own the Genesee Valley Ranch, who guaranteed the minimum price per pound for all swine at $5.

The reserve grand champion beef also came from an Indian Valley 4-H’er, Grace Kingdon. Wilburn Construction paid her $3.50 a pound, $4,777, for her steer that tipped the scales at 1,365 pounds. She was also the senior beef showmanship winner.

Chester-Lake Almanor 4-H’er Nichole Cardona sold her 284 lb. grand champion swine to Dig It Construction for $6.25/lb., amounting to $1,775. She and her porker also claimed the prizes for senior swine showmanship, senior round robin and champion breeding swine.

For the third consecutive year, the grand champion lamb honors went to Case Emsoff of the Sierra Valley 4-H. The 132-pound sheep sold to John Breaux of the Breaux Group who paid $13/lb., $1,716. Again this year Emsoff was also the junior sheep showmanship winner.

Anela Caudle from Echo 4-H raised the meaty 134-pound reserve champ sheep, which was also the round robin winner. Safeway Stores in Quincy paid $1,608 for the lamb only to donate the animal back to the sale with those proceeds earmarked toward the Quincy Rotary Club’s upcoming restoration project for the fairground’s livestock compound.

Les Schwab Tires in Portola bought Louis Siqueido’s grand champion goat. They paid $13.25/lb for the 88-pounder worth $1,166 for the Loyalton FFA member.

Matthew Graves sold his reserve champion goat, and the showmanship winning, to Dobbas Ranch for $12.50/lb. It weighed in at 73 pounds and earned the Loyalton club member $912.

Not to be outdone, Cal Sierra Title Co. paid a little more per pound, $27, for the reserve champ turkey raised by Elizabeth Higgins from American Valley 4-H. She earned $702.

Thelma Olsen, Julie Drybread-Hernandez and John Steffanic teamed up to buy the grand champion pen of two meat birds raised by Cailean Kennedy of the Treasure Mountain club. They paid $27.50/lb., which amounted to $305.

Many buyers donate their purchase(s) back to the auction to be resold for the benefit a particular cause.

This year Bresciani Insurance and Bresciani Ranch donated back to the Mac McElduff Foundation.

Others who contributed to the success of the sale included Plumas-Sierra Telecommunications, which sponsored the auctioneer’s services. The Plumas County Sheriff’s Employees Association picked up the tab for the buyers’ breakfast and Alpine Beverages provided drinks.

As always, Auctioneer Wesley Neer did a masterful job working a generous crowd of buyers that packed the sales area that morning.

Andrea White, president of the sale committee, expressed her appreciation for all those who helped make the day so successful for the 4-H and FFA youth. “We couldn’t have done it without them,” she said. 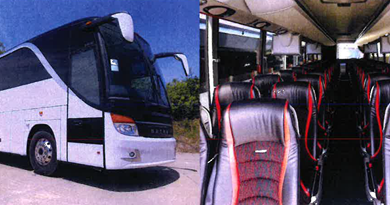 Procession for officer who died of COVID scheduled for June 24

The Susanville Police Department has announced details regarding a procession and memorial service scheduled for Thursday, June 24, to honor…

Speeders to be targeted this Friday through Sunday across the West

The California Highway Patrol  is partnering with 11 other highway patrols, state patrols, and state police agencies for the Western…