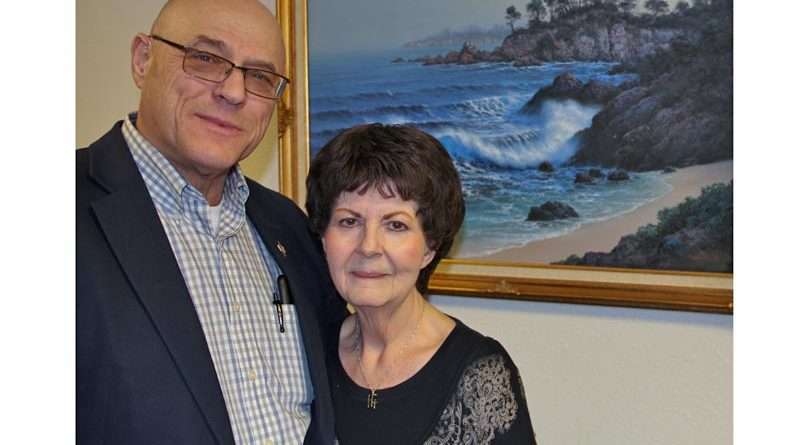 Larry and Shirley Blair from Humboldt and Shasta counties are the new owners of Blair Mortuary and Cremations, Inc. in Quincy and Chester-Westwood. Photo by Roni Java

When you shake hands with Larry and Shirley Blair, the new owners of Blair Mortuary and Cremations, Inc. in Quincy and Chester-Westwood, their down-to-earth warmth and kindness come through. Although they are newcomers to Plumas County, it feels like they’ve been here forever.

“We are so glad to be here,” they say, almost in unison and with a laugh.

Raised in Humboldt County, they lived along the coast for many years and Larry finishes the sentence, “We got tired of 12 months of foggy winters. Sometimes, we had NO summer at all!”

They are sure to get plenty of summer sunshine in the Lost Sierra.

The Blairs have essentially come back out of retirement to establish two new business locations that will serve Quincy and Indian Valley as well as Chester, Lake Almanor and Westwood.

Local pre-need arrangements will be honored

Open since December, when they celebrated their 50th wedding anniversary, the Blairs are now busy working from their temporary location in East Quincy.

The couple will serve both Plumas and Lassen county families and they are in escrow to purchase Fehrman’s Mortuary and Crematory property at 372 Lawrence St. in downtown Quincy. They have plans to do some renovations at the property and within the home located on site.

Larry and Shirley especially want to let clients in the surrounding communities know they are happy to honor all pre-need arrangements made with Fehrman’s. Please call the Blairs at 283-9106 to update your records.

A licensed funeral director, embalmer and crematory manager, Larry is also licensed as a pre-need insurance agent with Homesteaders Life Company. He and Shirley have specialized in the funeral service industry for 45 years and they make a good team.

He officially began his career in the 1970s in Arcata and graduated from the San Francisco College of Mortuary Science in 1977. It was almost an accident that he ended up in this line of work.

Shirley’s father was a minister with many friends, one of whom was Tom Fields who owned a funeral home. Shirley recalls that, at the time, she felt a little nervous about the thought of working in that area of service.

“I told Larry, whatever you do, don’t go into that business,” she says now, smiling at the irony.

As it happened, the couple had only been married two years when they moved into an apartment in Arcata and Larry saw an older gentleman across the street struggling with some heavy loading. Ever the helpful sort, Larry went over and offered to help. The fellow wanted to hire him on the spot for just that sort of work and Larry said sure.

“It turned out to be Tom Fields, my dad’s dear friend!” Shirley chuckles. “And that was the beginning of that.”

Larry went on to manage two North Coast funeral homes before he and Shirley purchased Chapel by the Sea in Fort Bragg in the late 1980s.

After selling that company in 1999, Larry spent another 11 years managing it while he also tended to his duties as an ordained pastor with the World Assemblies of God Fellowship (A.G.) in Fort Bragg.

Next, the couple established Blair’s Cremation and Burial Service in Redding in 2012.

“It was so warm in Redding,” Shirley recalls. “It felt good in my bones.”

Larry smiles and confirms the experience.

“I was praying,” he says of their time at the coast. “Oh Lord, I’d like to move somewhere warm!” and he felt guided to drive to Redding to look for a specific building. He found it all right, on a frontage road with a for-rent sign on it and that became their Shasta County location and a new base from which Larry could continue his work as an A.G. pastor, this time for six years in Shasta Lake.

With two daughters, three grandchildren and an 18-month-old great-granddaughter named Charlie, the Blairs will tell you they have always felt divinely guided in their personal and business affairs and they share wonderful stories about good friendships and customer relationships that have enriched their lives.

They proudly explain they built their Redding business from scratch, focusing on customer care and providing affordable services to grow from zero clients at the start to 780 by the fourth year in operation.

Three qualities that serve them well in their chosen work include:

– Being flexible to all needs a customer may have.

“You learn quickly the importance of helping people no matter what level they are on,” Larry says. “Your client may be grief-stricken or perhaps feeling acceptance for the loss they are going through. It’s different for everyone.”

– Sensitivity, compassion and grace are valued. The Blairs acknowledge no two families are ever the same and they don’t treat them like they are.

– Being emotionally responsive is a good skill to have, too.

“Cry or laugh with them,” Shirley says quietly. “Just be present with the person emotionally, wherever they are at.”

How they came to Quincy is another good story about reaping the blessings of friendship.

Larry now travels a bit serving as a guest pastor at various A.G. churches. He attended a 2018 ministers’ conference in Lake Tahoe and ran into longtime friend Greg Marr who owns the Manni Funeral Home and Evergreen Crematory in Portola. Marr mentioned Fehrman’s was for sale.

The Blairs were retired both technically and practically, but they decided to visit Quincy and fell in love with the area.

So they made an offer on the Fehrman property. That purchase is now coming together and they are looking forward to their new enterprise. They’re also attending the Christian Life Fellowship Assemblies of God Church in Quincy, so be sure to say hello when you see them.