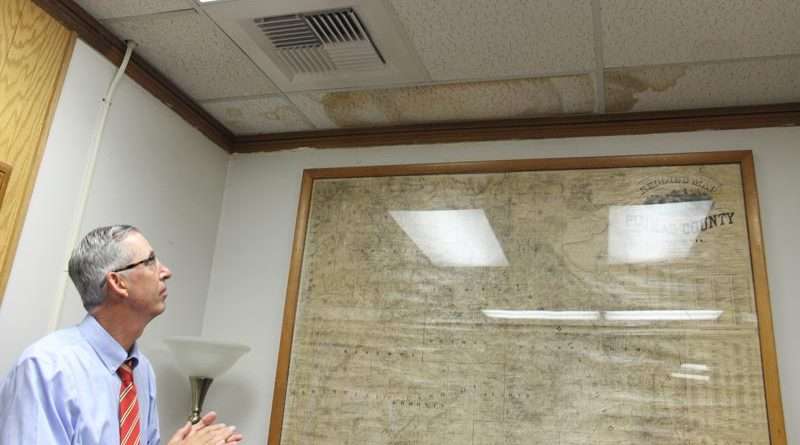 District Attorney David Hollister indicates a portion of the fourth-floor ceiling that has become water-damaged during recent storms. Although the water is apparent in several locations on the fourth floor of the Plumas County Courthouse, with ceiling tiles removed in one office, it’s the possibility of mold that most concerns Hollister and his staff prior to testing results.
News
July 3, 2019July 2, 2019 Victoria Metcalf, Assistant Editor

An early June heavy rain and hailstorm cost Plumas County more than $25,600 in repairs and costs are mounting.

It’s a reminder that the historic Plumas County Courthouse is 100 years old and requires constant upkeep, according to Facility Services Director Kevin Correira.

Opening the door to the fourth-floor district attorney’s offices the morning after the storm, D.A. David Hollister said they were assaulted by the smell of mildew and damp.

Concerned for his staff, Hollister said he sent one employee offsite to work. Others complained of headaches and other illnesses as the days progressed before the situation was fully evaluated and repairs began.

By June 20, Hollister received results back concerning an inspection of the fourth floor for signs of mold. “We do not have any airborne mold so as to cause an immediate move,” he said, but he was genuinely concerned about the health of his staff.

By June 21, Environmental Health Director Jerry Sipe, Correira and County Administrator Gabriel Hydrick toured the fourth floor to see what could be done to repair ceilings and the roof. Efforts were also underway to dry out carpeting.

Correira said that other expenses included the cost of having the custodian crew in. “We have not received a bill yet from our custodial service, but I’m sure it will be expensive,” he said.

And while one air quality test was done through the arrangement of the district attorney, a second will also be done. These tests cost $1,000 each.

“I would like to state however that we were at the courthouse immediately after the storm,” Correira explained, “and started mitigation efforts to clean and dry all areas so this would not be an issue.”