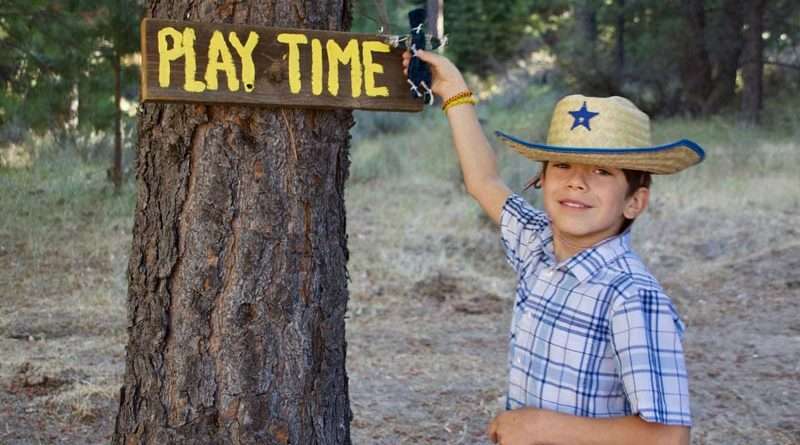 Wade Preston holds up the doll he made from fabric and string at the Play Time station. C. Roy Carmichael third-graders took a trip back in time to experience White Sulphur Springs Ranch, circa 1850. Volunteers from the Mohawk Valley Stewardship Council brought the place to life for these enthusiastic students. Photo by Linda Cooley
News
September 25, 2019October 2, 2019 Linda Satchwell, Staff Writer

The Mohawk Valley Stewardship Council once again hosted C. Roy Carmichael third-graders for their “School Days” living history event at the White Sulphur Springs Ranch, also known as the George McClear house. The historic ranch has been around since the early 1850s.

It was a hotel and also a stagecoach stop until 1907. Since then, it has been a private home, a B&B, and a gathering place for the community — especially at the pool, which is fed by a naturally heated spring.

After the year 2000, the house and outbuildings fell into disrepair until 2010, when the MVSC obtained a grant, along with a substantial donation from the landowner, for acquisition of the house and the surrounding 42 acres.

Part of the mission of MVSC is to serve as a community gathering place and a center for living history. So, on Friday the 13th of September, over 40 third-graders and their teachers, Mrs. Kooyman and Mrs. Cone, got off of a yellow school bus and stepped into the world of the Mohawk Valley, circa 1850.

First, they were escorted into the large three-story ranch house, where Dick Short, dressed as a miner from that era, told them about his life, and the life of his fellow miners. He told them about the history of the house, and how the MVSC had purchased it so that it could live on, and children like these third-graders could continue to enjoy it and learn the story of this beautiful place.

Short then asked if the children had questions. One girl asked how much the house cost to purchase. After being told about $1 million, another girl, undaunted, asked if they could buy it.

Wade Preston asked who made the replica of the house that stood to Mr. Short’s left. Short proudly answered that he had made it himself, and he may have dropped character for a moment, he was enjoying that present-time conversation so much.

Janet Reihsen, the event organizer, explained that the children would break up into six groups, and each group would start at a different one of the learning stations.

The first station was “Leather Works,” where children used wooden mallets to stamp the letters of their names, and images of stars, flowers and more into leather wristbands with metal stamping tools.

Second was “Play Time,” where they made dolls from fabric remnants and string. After that, a hike up the mountain on trails cleared by the Sierra Buttes Trail Stewardship offered a stunning view of Mohawk Valley and station three, where Janice Cross offered an insight into “Indian Lore.” The children sat on the rocks and learned Maidu Indian history.

Cross explained how, in the early 1800s, the Maidu would come to the Mohawk Valley in the summer months, camping in small groups and trading goods. They lived off the land, Cross said, and she showed them plants the Indians gathered.

Maidu made tools from rocks and wood, including arrows, which they used to hunt deer and other animals. Cross shared arrowheads that she found on her own property nearby.

Then she showed the students grinding holes, still very visible in the large rocks where the Indians ground small seeds, pine nuts and acorns, and also maintained a good view of the valley below.

The group then hiked back down to the pond, where they saw the wide mouth bass and learned about the warm and cold springs on the ranch.

They next walked back to the main area near the house, where they made fruit boxes, always one of the favorite stations, according to MVSC photographer Linda Cooley.

Those fruit boxes are tied to the history of Graeagle. In 1919, the California Fruit Company purchased the land along Gray Eagle Creek in order to cut and mill lumber to build shipping boxes for fruit, which they provided to growers throughout the state. Their Blue Anchor imprint, found on the box ends, is the company’s trademark.

Children learned some of this history while they built their boxes. Then, they picked from the Blue Anchor CA Fruit Exchange and Summit Apple designs to decoupage onto the ends of their boxes.

At station five, students learned how to do laundry the old fashioned way, hauling water, and using a bucket and washboard. The kids loved this. “Wait till their parents find out,” said Cooley.

The final station was the Cornhole Toss game. This was a new station this year, and children had a great time picking teams and competing.

After each group had rotated through four of the stations, it was time for lunch. MVSC volunteer Patrick O’Reilly, who claimed he had arrived here after escaping “The Famine” in Ireland, provided the musical entertainment. He had a convincing accent too, though he said he inherited it from watching Irish Spring commercials.

He brought along traditional instruments, including spoons, a washboard and cowbell, a drum, and a washtub base, which the kids played to accompany his songs. There were some surprisingly good musicians, and the children were having so much fun, they broke into a spontaneous dance near the end of the session.

After completing the last two stations, it was time to board the yellow school bus and travel forward in time to the present once again. But, this time, they traveled with memories of a tantalizing time gone by.

With any luck, and with the help of the hard working MVSC volunteers, these kids’ children will come here one day to learn about life in the magical Mohawk Valley in a time long past.