Dave Henise was known in the Chester/Lake Almanor basin as the guy with the cleanest truck and the one who made you laugh. While he was secretary of the Lake Almanor Elks Lodge, members would actually look forward to him reading the meetings’ minutes! 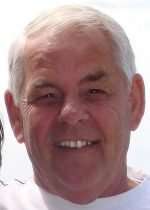 Dave was born January 12, 1943 in San Francisco, California, and grew up in Daly City. After serving four years in the Air Force as an aircraft electrician, hence the name “Sparky”, he started his multi-faceted career as a professor at Hartnell College in Salinas, California, teaching Material Science, Vocational Drafting, Technical Math and Industrial Processes. While at Hartnell, he was famous for giving the longest 5-minute speech and began his secondary career of being THE number 1 fan of the San Francisco 49ers, as he traveled the 205 miles round trip to usher every home game for years.

After eight years at Hartnell College he took a one-year sabbatical to enter the industrial world, which fit him to a T. He started as Drafting Manager, then became an Engineering Manager. He would tell you the best thing about that sabbatical was meeting the love of his life, Suzie. He would also tell you how when they met, HE was the boss. Then they got married and SHE became the boss!

Dave and Suzie moved to Lake Almanor in 1990 where Dave became a successful Real Estate Broker before retiring in 2006. He and Suzie enjoyed 7 wonderful years of retirement when suddenly in 2013 he had a massive stroke, leaving him paralyzed on one side. Staying true to form, when airlifted to Reno, the helicopter medical staff asked if he wanted anything. His answer was, “Can I drive?”

During Dave’s post-stroke years, he never stopped telling jokes or teasing his caregivers. He kept medical staff laughing whenever possible, brightening their spirits. On January 4, 2022, he suffered another stroke and 3 days later he left his long, lovely, enjoyable time on earth, with family by his side, on January 7th.

Dave is survived by his wife Suzie of Chester, his son Jeff of San Francisco and many friends and relatives who will miss him dearly. He will be remembered for his hard work, his kindness, his willingness to lend a hand, his wit and his clean truck! He is at peace.

Dave’s Celebration of Life will be April 23, 11:30am, Lake Almanor Elks lodge, Chester. In lieu of flowers, donations to the Elks lodge are appreciated.

As we approach the first anniversary of his death, we honor Roger W Clark, who passed away peacefully on May…

James Vincent Bender (Jimmy) of Graeagle, California was born in Reno on January 25, 1946 and passed on April 17,…