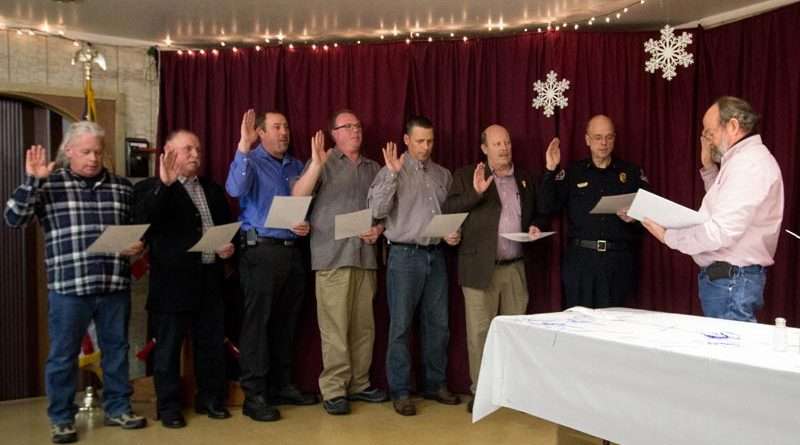 Each year, as they have for the past 141 years, members of the Quincy Volunteer Fire Department select one member who best exemplifies the mission and values of the department by honoring this individual with the coveted Firefighter of the Year award at the department’s annual installation dinner and awards ceremony.

This year that prestigious tribute went to Tony DeMartini, who is one of the department’s veteran firefighters and engineer.

In making the presentation at the Saturday, Feb. 9, banquet, Fire Commissioner Andy Ryback said that DeMartini’s selfless dedication and contributions to the department have been nothing less than inspirational.

He told the crowd that this year’s recipient is consistently present at all fire calls, drills, the department’s community service functions. including his endless work on the school fire safety educational programs.

He added that as an engineer, DeMartini’s engine is always the first out of the station for fire responses and his contributions to mutual aid requests like the recent Camp Fire in Paradise are unrivaled.

“With Tony’s nearly four decades of firefighting experience at the Quincy department he has been a strong mentor to generations of new firefighters,” said Ryback.

Fire Chief Robbie Cassou also praised DeMartini’s dedication to the department and the community. “All it takes is a simple phone call on any given day at any time for help on a department project and Tony’s immediate response is ‘I’ll be there in 5 minutes’ whether it’s washing hoses or installing reflective signs,” said Cassou.

Fire Chief Robbie Cassou made a special presentation of Certificates of Merit given to firefighters Edward Badalamenti, Ryan Nichols, Parker Carey and Captain John Gay for their quick and unplanned response to a cabin fire. “Without the fast action of all four of these men, the survival of the building’s non-ambulatory occupant would not have been possible,” Cassou said.

Badalamenti, Nichols and Carey were together in a private vehicle on Lawrence Street when they noticed a cabin on fire. They stopped and were immediately informed that there was an adult trapped inside the structure. At what Cassou described as a great personal risk, Badalamenti and Nichols entered the smoke filled structure to search for and remove the resident.

While that was happening, Carey ran to a neighboring structure and returned with a fire extinguisher to fight the blaze. Gay, who also stopped in his personal vehicle, helped Carey and the two quickly extinguished the fire.

Badalamenti and Nichols were also awarded Medals of Honor for their heroic life-saving effort to save the occupant.

“Dave has proven to be a real asset to the department. He is very reliable and always checking in to see if there is anything he can do to help around the fire station. He is also very mechanically inclined, which is certainly an added bonus,” Griffin said.

He also introduced Stephanie Tolen and Dean Eaton who both joined the Support Team last year as volunteers helping their community and the department.During the evening’s ceremonies, Cassou introduced Eric Vinyard as the department’s newest certified firefighter after completing the required training necessary to receive certification.

He also thanked the 30-some members of the Dixon Fire Department for preparing the evening’s dinner. For 51 years, Quincy and Dixon have had a reciprocating relationship to cook at the other department’s annual banquet. A Quincy contingent travels to Dixon in March for their installation.

Currently, the department has 29 volunteer firefighters and auxiliary members, 14 volunteer support members and a paid staff of three: the chief, an administrative secretary and Charlie Read, the department’s mechanic/facilities manager.

Quincy Fire, like all the departments in the county and across the country, is always looking for volunteers to become firefighters or a member of the support team. Chief Cassou encourages anyone interested in learning how to become a part of this family to talk to him or with one of the department’s other volunteers or staff.