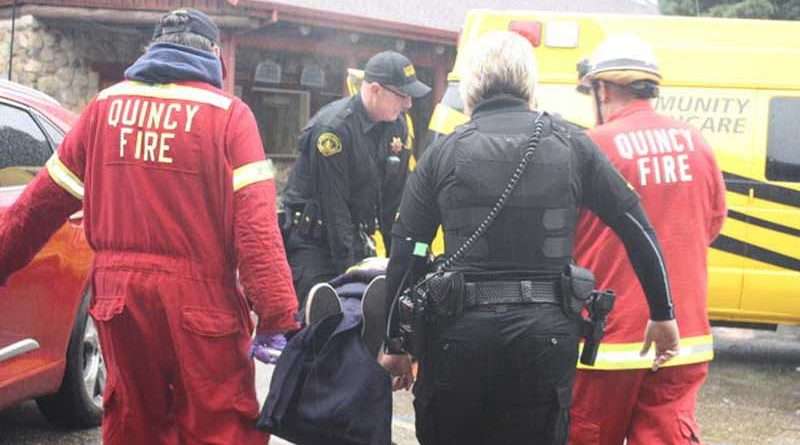 Four people were killed and 11 wounded when an armed gunman with a pistol opened fire at what’s being called one of the worst disasters in Plumas County’s history.

The gunman then turned the weapon on himself and died of a gunshot wound to the head.

It was to have been the annual Plumas County Picnic, but rain forced participants indoors for festivities that went so wrong — and in reality so right.

Emergency personnel from throughout Plumas County responded to dispatches for help at the fairgrounds Thursday, Nov. 16.

The scenario for the Mass Casualty Incident drill had a lone gunman with a pistol opening fire on people who until just moments before were enjoying themselves, family and friends.

And then the Plumas County Sheriff’s Dispatch received its first call from a woman who said she had been shot inside Serpilio Hall. She said that there was only one shooter.

It could have been chaos, but as members of various emergency services groups answered summons from dispatch, trained personnel went straight to work.

The majority of those wounded, including one in critical condition, were loaded into ambulances. Most were transported to Plumas District Hospital, a few others to Eastern Plumas Health Care in Portola.

During a real situation, or an enactment on a clear day, helicopters would have flown the most seriously wounded to Renown Hospital in Reno, explained Darren Beatty, special project manager for PDH.

As an evaluator at PDH, Beatty said there was a degree of surprise in learning just how many people could be cared for at the facility.

PDH personnel turned the ambulance bay into a receiving station with skilled personnel ready to begin a more thorough medical evaluation. Those individuals were then taken to emergency or to other services depending on their needs.

The one individual who was critically wounded with a bullet to the chest would in real life be flown to Reno, if the weather were better, Beatty explained.

But with the rain and the fact that medical helicopters were grounded, PDH medical personnel were forced to cope with the situation, he said. And they did incredibly well.

The operating room was really in use at the time of the enactment, Beatty said. Therefore, different elements came into play. First, they had to prepare the patient for surgery and then wait until the single operating room was cleaned and available.

Plumas County only has one operating room, so the patient couldn’t be transported to another facility, Beatty said.

The fact that the OR had to be cleaned brought in the housekeeping staff. They had to do a thorough job in record time to prepare the room for the new patient.

During an enactment, emergency and medical personnel are encouraged to have conversations that they would have during a real situation. Beatty said that the shootings in Tehama County were fresh in everyone’s mind and helped make the enactment more vivid.

Beatty said that several years ago he had had a discussion with Steve Tolen, a long time paramedic with PDH and then an instructor. Tolen said that although the facility isn’t a trauma center, there’s still a lot that could be done to save a patient’s life.

Beatty said that the staff of about 15 individuals did a great job and they learned they could have managed more individuals during a crisis.

“I think it went really well,” said Robbie Cassou, Quincy Fire Chief and incident commander.  The drill brought together people who might not ordinarily work together and provided a valuable opportunity. It also showed areas where they could improve for the future, he said.

Behavioral Health staff were also invited to participate, but did not, she said.

Beatley is the coordinator of this year’s active shooter drill. Lassen and Sierra county health departments were instrumental in assisting with this year’s plan, Beatley said.

At the time of planning, she explained she had only been with the health agency for six months. Lassen County’s health department works closely with its local law enforcement and was particularly helpful in providing technical assistance for the design.

This was the second part of the drill. The first was held Nov. 1 at Feather River College in what was called a tabletop preparation model.

Across the state, emergency services agencies and health departments have participated in similar enactments or are planning them.

Although county enactment organizers were encouraged to put their own spin on the active shooter scenario, the 2017 California Statewide Medical and Health Exercise was sponsored by the California Department of Public Health and the Emergency Medical Services Authority.

The state’s manual was designed to provide input, advice and assistance from the SWMHE workgroup and its members.

The enactment was established with expected outcomes so agencies could individually evaluate themselves and how they did with all groups working together.