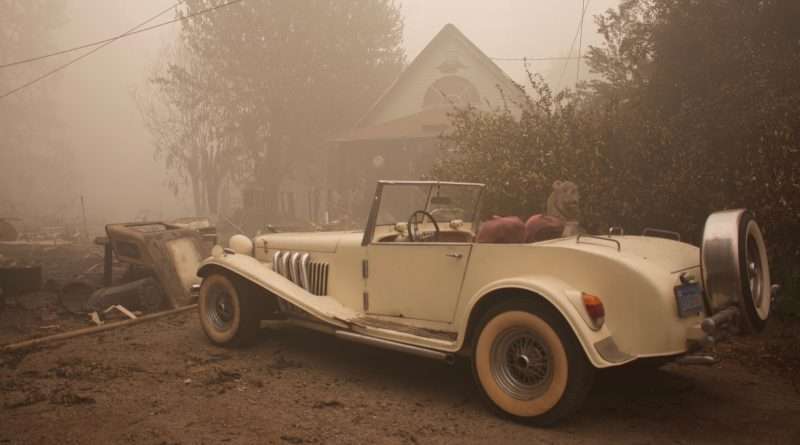 Despite the devastation the Dixie Fire brought to Greenville, there were some minor miracles. This will bring a smile to someone's face. Photo by Spanish Peak Productions
News
August 8, 2021August 9, 2021 Editor

On the East Zone of the fire, the line is looking good around the perimeter from Bucks Lake to Crescent Mills. Crews continue to deal with Silver Lake, the once piece that is proving to be a challenge.

Operations Section Chief Jake Cagle said that the line looks good all the way up into Pecks Valley. There is structure prep through Evans Peak.

Then the fire gets a little more challenging. Once the inversion lifted around 1 this afternoon the fire grew by China Gulch, near Lone Rock, the site of the spot fire.

Cagle mentioned the mandatory evacuation orders for the Antelope area and said people need to leave because there is only one way access into Antelope at this point.

Crews are going to try to put in an 8-mile stretch of line to connect the Walker burn scar to the Sheep  burn scar (8 miles), to keep the fire from pushing closer to Janesville. Cagle said there was quite a ways to go for Janesville, but based on past fire behavior was not ruling it out.

Work continues along the Eastshore of Almanor  to keep the fire from reaching Clear Creek and Westwood.

There are changes to report here as the Cal-Fire Lassen Modoc Unit is taking over a portion of the fire. Incident Management Team 3 Operations Section Chief Mark Brunton said the zone is now divided into three operational sectors: Butte, Lassen and Westwood.

The Butte Sector –  which includes the origin of the fire through most of Butte and into a portion of Tehama County is looking really good, and is pretty much in patrol status.

There is a challenge as the Butte sector transitions into the Lassen section along the left flank of the fire, but it is being buttoned up and will be used as an anchor.

The Lassen sector contains the portion that pushed its way into Lassen Volcanic National Park. Brunton said that that the fire is expected to make a significant push in that section.

The Westwood sector includes Chester, Greenville, and the Almanor Basin. Brunton and the team are concerned that the fire could impact the peninsula and are working to “provide the most protection we can.”

The West Zone is working with East Zone to prevent the spread from the east to the west.