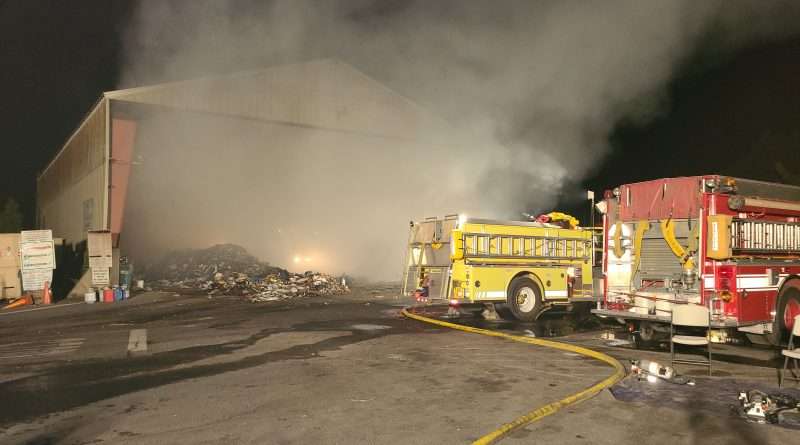 The cause of the fire is not known, but fires in transfer sites are not unusual. Last night’s blaze at the East Quincy transfer station was quickly subdued by the Quincy Volunteer Fire Department. The fire broke out in the late evening and the flames were reported subdued by about 9:45 p.m.

Interim Solid Waste Manager John Kolb, who was on scene, said the most likely cause was charcoal from someone’s barbecue. “It happened 10 years ago at the Chester transfer site,” Kolb said. “That one was much worse.” He said the East Quincy site has had several smaller fires in the past.

When asked about the incident, Quincy Fire Chief Robbie Cassou said that fires at transfer sites are not uncommon, and that because of the nature of these fires, there wouldn’t be any official investigation into the cause of the fire ordered by the state. He said unfortunately people, either intentionally or unintentionally dispose of flammable materials like barbecue coals that are perhaps unknowingly still burning, or things like lithium batteries, flammable chemicals and other ignitable sources in their trash rather then wait for the reoccurring hazardous materials official waste collection events. He said the last fire at the East Quincy Transfer Site was about two years ago.

The metal building is still standing, though the fiberglass panels that were added to allow light into the facility are in varying states of damage. The southside windows are melted; the eastside windows are gone; but the northside panels remain intact. Kolb said the structural integrity of the building needs to be assessed, but he is hopeful that once the site is cleaned up, it can be reopened.

The fire couldn’t have come at a worse time, as Waste Management/Feather River Disposal struggles to catch up with the garbage that accumulated when service was suspended as a result of Dixie Fire evacuations. The transfer site is used for self haulers to bring their trash, and for the trucks to bring the curbside pickups for residential and commercial customers.

Barry Nealan, the local district manager for Waste Management who oversees Plumas County operations, said that the company’s other transfer site is in Chester, which they can’t use because of the town’s mandatory evacuation orders. He hopes the community will be patient while they figure out how to provide services, adding that it will be a challenge. Nealan said that it’s likely the fire compromised the facility’s integrity, so once their curbside garbage trucks are full there is no place to empty them at present.

“We hope to be back to normal operations soon, whatever that normal is these days. Please bear with us,” he said.

Kolb praised the Quincy Volunteer Fire Department for knocking the fire down so quickly. The transfer site is near the Quincy Little League fields as well as the Plumas County Jail.

The department had 12 firefighters and four support team members fighting the blaze which they finally were able to mop up at around 1 a.m. Thursday morning. Cassou said his department will be using thermo imaging cameras throughout the rest of the day today looking for any hot spots in the tons of smoldering garbage that need to be extinguished.

Editor’s note: We want to add our appreciation to the Quincy Volunteer Fire Department. This is the fourth time in little more than a year that they prevented a fire from becoming a potentially catastrophic event. A little more than a year ago the volunteers put out the fire that consumed the Plumas Crisis Intervention and Resource Center and other structures just one block from the Plumas County Courthouse. Not too long after, they arrived at the scene of a house fire in downtown Quincy also near the courthouse. Then earlier this year,

the volunteers put out a fire that consumed a trailer in the park across the street from the post office. All jobs well done.