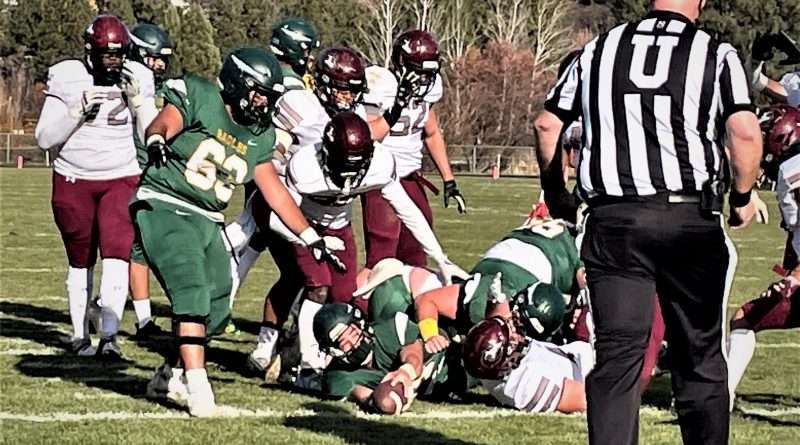 Feather River College freshman running back, Tanner Hall, stretches for the goal line just seconds before the end of the first quarter Nov. 27 as the Eagles take on the Lobos of Monterey Peninsula. Photo by Mari Erin Roth
News Sports
November 29, 2021December 2, 2021 Editor

The Feather River College football team won their post-season bowl game with the Monterey Peninsula Lobos by a score of 34-16. The Lobos were number one in their division, winning conference games 4-0, but met their match when they played the high-flying Eagles in Quincy Nov. 27 in front of a full stadium of football fans.

The Lobos were on a 5-game streak when they travelled to Plumas County to meet the undefeated Eagles, ready for a different outcome the second time around. The FRC men first introduced themselves to the Lobos during the 2021 season on Sept. 18 in Monterey when FRC won by a score of 32-15.

The post-season bowl game scoring started with the Lobos Sergi Rodas-Mendoza kicking a 42-yard field goal. It took the Lobos 12 plays to travel 50 yards in order to get those points on the scoreboard. Seconds later, FRC’s Da’Jon Thomas made a 75-yard run to score for the Eagles and take the lead with a good kick from Gio Morales, 7-3.

At the top of the second quarter, Feather River’s Jacob Backus caught a 33-yard pass from Jared Taylor to score. Gio Morales made another good kick to widen the Eagle lead over the Lobos, 14-3. FRC’s Dalton Flowers caught a 49-yard pass from Taylor to land in the end zone with 9:35 minutes left in the second quarter. Morales remained consistent scoring on the kick for the Eagles, 21-3. Sam Marshall picked up a 6-yard pass from Taylor to score for Feather River, 27-3, with 5 minutes left in the half.

It wasn’t until the third quarter was almost over that the Lobos rallied on the scoreboard when Lobo Quinton Lewis caught an 11-yard pass from Will Weinmann, 27-9, after a failed 2-point conversion attempt.

The Eagles came back in the fourth quarter with more marks when FRC’s Thomas caught a Taylor 8-yard pass followed by a good kick from Morales, 34-9, with just 2:13 remaining in the game. Monterey had the last word though with 1:36 left on the timer. Lobo Lewis caught a 14-yard pass from Joshua Elmore, and a good kick from Rodas-Mendoza brought the final score to the tenth win in a row for the Feather River College Eagles, 34-16.

The Lobos put up a good fight, but the high-flying Eagles soared undefeated for the 2021 season.