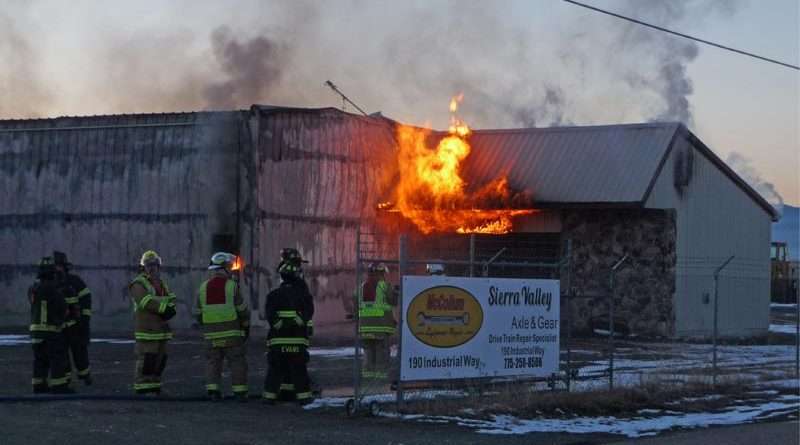 A structure fire at 190 Industrial Way in Beckwourth sparked up in the wee hours of the morning, with firefighters from Beckwourth Fire and Sierra Valley Fire battling the blaze shortly after 4:30 a.m. on Feb. 21. Photo by Susan Jacobson
News
March 2, 2018March 1, 2018 Lauren Westmoreland, Staff Writer

Hours before the sun came up on the chilly morning of Feb. 21, Beckwourth Fire Department received a call about a structure fire located at 190 Industrial Way in the vicinity of Sierra Valley Axle and Gear, off of Hwy. 70.

Beckwourth Fire Chief Greg McCaffrey said, “We received the call at about 4:30 a.m. … and by the time we arrived, it had already become totally involved.”

Mutual aid responded from the Sierra Valley Fire Department and the teams set to work to control the blaze that had already had time to bloom with smoke and flames.

“Altogether, I arrived at the fire at about 4:30 a.m., and I just sat down at a little after 11 a.m., so it was a six- to seven-hour job getting this fire contained,” McCaffrey noted.

With the blaze contained, and no injuries reported, the cause of the blaze remains under investigation.