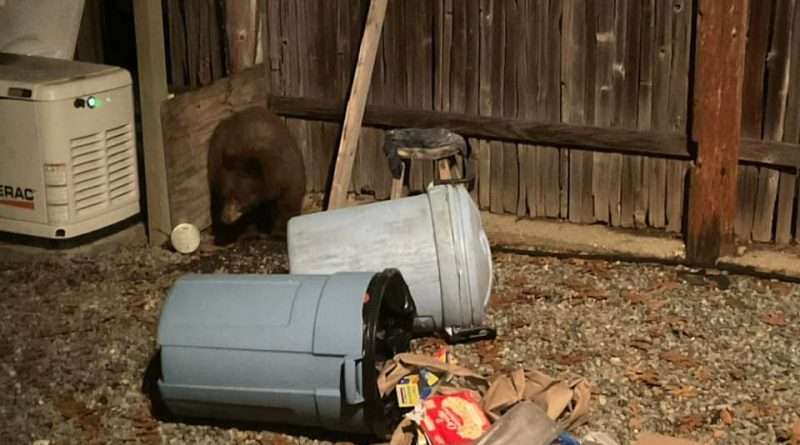 Summer is here in Plumas County and that means more visitors recreating in bear habitat, which increases the chance of encountering a bear – or a family of bears. Increased visitation also brings more temptations for bears to discover human food and garbage sources.

For Plumas bears, summer is a time for new beginnings as mother bears (sows) are often accompanied by very small cubs that were born in January or February and are now experiencing life outside the den for the first time. These “cubs of the year” are sticking close to their mothers and learning important survival skills in the wild. They will likely separate from the sow in one year.

Cubs of the year are dependent on their mothers and are taught by their mothers how to forage on natural vegetation, including grass, berries, grubs, and other natural wild bear foods. Sows are protective of their cubs and people need to give them space. Never get in between a sow and her cubs. If you see a cub of the year alone, or up a tree for safety, the sow may not want to leave the area so back away and give them room to reunite.

Summer is also a time for parting ways, as other sows have yearlings with them that were born in winter dens over a year ago. These yearlings are about to be cut loose by the sow so she can search for a mate during the summer breeding cycle. Yearlings vary in size, but they are well-equipped to make it on their own and do not need handouts or human intervention.

This time of year, wildlife agencies receive many calls from people concerned that they have found an orphaned cub when they are seeing a yearling that is safely on its own. A good rule of thumb when determining the difference is to look at the size of the bear. If the bear is the size of a cat (around 10-15 pounds) it is a cub of the year and chances are the cub’s mother is somewhere nearby or may have put the cub up a tree while she goes to forage. Keep an eye on the cub from a very safe distance, and if you do not see the sow after a couple of hours, call the appropriate state wildlife agency below and they will send a wildlife expert out to assess the situation.

Picking up a cub too soon or while the sow is just around the corner can do a lot more harm than good. Don’t teach these young bears to be comfortable around people! If they are too close, make noise and try to scare them away so they don’t feel comfortable and want to stay.

While it’s fun to see bears and even take pictures and videos, this behavior teaches the bear that it’s safe to be close to you. Bears are smart and acquire learned behaviors based on their experiences. If they have a negative, frightening encounter with a human, chances are they will try to avoid humans in the future. Allowing bears to become comfortable around people can lead to unwanted activity, including breaking into cars and houses or approaching people who are eating outdoors. It is illegal to feed bears both directly and indirectly by allowing them access to garbage or food.

Throughout the busy summer season, the number of visitors to the area steadily increases, and humans must be vigilant with food and trash storage whether at home, the beach, campgrounds, picnic areas or trailheads. Enjoy wildlife from a distance, and don’t attempt to handle young bears. With your help we can Keep Plumas Bears Wild!

By Andrea Singer Staff Writer UPDATED: The deadline to participate in the survey was Jan. 21; however, if someone wants…