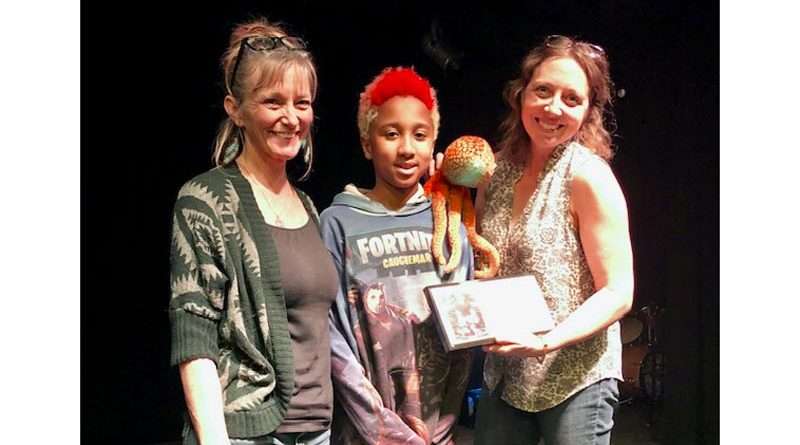 “We are humbly grateful for the generosity of the Johnson-Smart family and so many others who donated to the Magic Beanstalk Players in Elliott’s memory,” said drama instructor Danielle Wagner Plocki.

Over $16,000 was raised for the Magic Beanstalk program. At the request of the Johnson-Smart family, the money has gone into a fund, and every semester the interest accrued will be used to award a scholarship to a student enrolling in the program in Elliott’s name.

Johnson-Smart was a drama student for many years.

“Since he was 7 or 8 years old, Elliott was the young man who would have the others in stitches during rehearsals, but once he was on stage for the performance, he was all in, heart and soul,” said his former drama teacher Kimberly Carroll.

“Such talent from the very beginning. I feel honored to have been his first influence for the theatre arts. He is dearly missed by many. I am so happy that his memory lives on through this wonderful scholarship for the West End Theatre dramaworks program,” continued Carroll.

Johnson-Smart went on to be active in theatre throughout his college career as well.

This semester, sixth-grader, Bobby Barnes was awarded the scholarship.

“ We all quickly agreed that Bobby deserves this scholarship. Bobby has been in the Magic Beanstalk Player program for seven years, and has always showed enthusiasm for singing, dancing and acting,” said Plocki.

Last year he played the leading role of the Scarecrow in the Magic Beanstalk Players production of “The Wizard of Oz.”

“He did an incredible job! He embodied the character so well, had excellent voice projection and control, and good stage presence. Bobby shows 100 percent dedication to the program and improving himself as an actor,” Plocki said.

Barnes serves as a role model to younger kids and is quick to share his viewpoint on topics of discussion, has a vivid imagination, and strives to be the best he can be, according to Plocki.

“We are so proud of Bobby and are honored to grant him the scholarship,” added Plocki.

This year the Magic Beanstalk Players will be performing “Willy Wonka Jr.” on April 12 through 14 at

“We had a record number of

students audition last week! We will have two casts again this year, as the program continues to grow and grow,” said Plocki who is directing the show.

He will make an appearance in every show the Magic Beanstalk Players perform. “Look for Elliott the Octopus in our upcoming production of Willy Wonka,”  Plocki said.