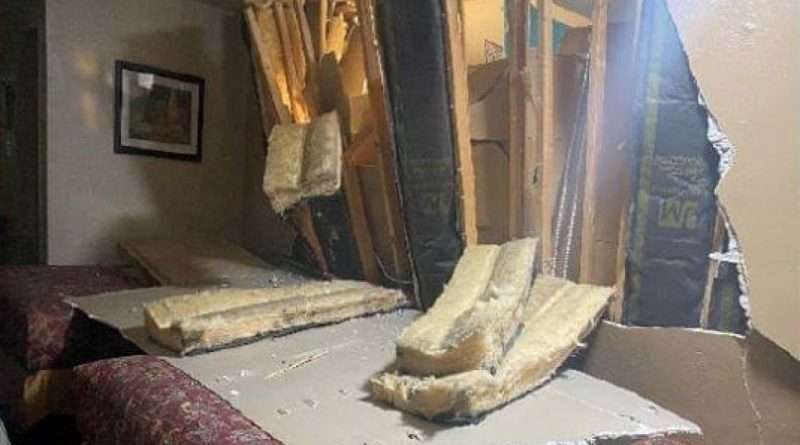 The Susanville Police Department is forwarding several charges regarding the Monday explosion at the River Inn Motel to the Lassen County District Attorney’s Office for review.
News
March 3, 2021 Editor

An evening explosion at the River Inn Motel in Susanville sent one to the hospital with major burn injuries Monday, March 1. According to a statement from the Susanville Police Department, an investigation revealed the room where the explosion took place was possibly being used as a honey oil lab.

At about 7 p.m. Monday, officers were dispatched to 1710 Main Street in Susanville at the River Inn Motel for a report of an explosion. When officers arrived at the scene, the statement read, they observed significant damaged to a motel room located on the south portion of the the parking lot.

There, officers were contacted by the occupant, Kyle Coger, 37, of Susanville, who had sustained major burn injuries from the explosion, the statement read. Fire and medical personnel arrived and provided aid to Coger before he was transported to Banner Lassen Medical Center. He was then immediately sent to the UC Davis Burn Unit.

“While investigating the explosion, officers located several items inside the motel room that revealed that the room was being used as a possible honey oil lab,” read the statement. “It was also determined at the time of the explosion, a young child was in the room; however, (the child) sustained no injuries.”

Several charges regarding the explosion will be forwarded to the Lassen County District Attorney’s Office for review.