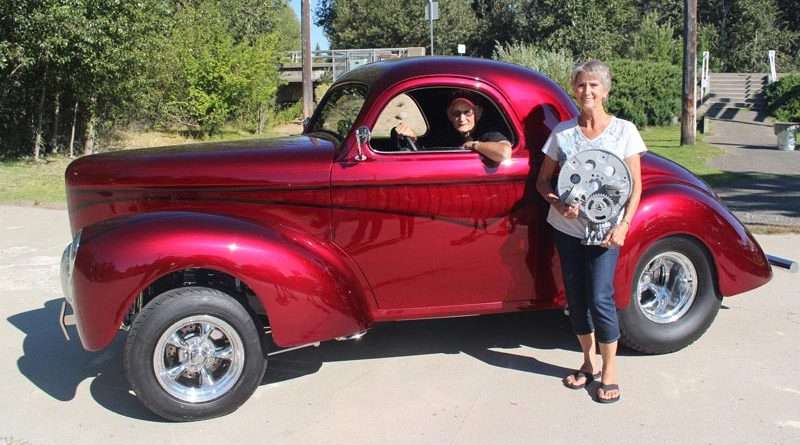 Sponsored by the Almanor Recreation and Park District and coordinated by board member Michelle Gosney, the show is one of the most anticipated events of the year.

Featuring 102 registered vehicles, car enthusiasts had the opportunity to show off their beloved vintage hot rods and classic automobiles for trophies and of course, bragging rights.

With the help of local volunteers, proceeds from the event are used to help fund ARPD recreational and sports programs for kids and other local community events throughout the year.

Organizers again welcomed a wider class of automobiles to the Street Rod Extravaganza than in years prior, including tricked out newer model vehicles and Rat Rods.

On the day of the show, visitors strolled around the park to admire the many awesome vehicles on display, while several people young and old danced in front of the amphitheater stage to the sounds of Westwood-based Side FX, which performed a number of mostly country-rock tunes.

Paisan’s Old World Deli & Catering mobile kitchen of Reno was on hand selling a variety of sandwiches and other lunch menu items to satisfy the appetites of those in attendance, plus Lassen Ale Works sold a stream of microbrews.

Of special note, unique, one-of-a-kind trophies made out of car parts for the winners were awarded in the various categories, including Best of Show, Viewer’s Choice, Ladies Choice, Kid’s Choice, Most Patriotic and Best Rat Rod, along with a number of honorable mentions.

Registered street rodders had the opportunity during the event to enter the Poker Run, which involved making a number of stops at various businesses around Lake Almanor and picking playing cards to form a winning hand.

Those who chose not to drive around the lake, but wanted to join in on the card competition, entered the Poker Walk instead.

The Poker Walk first place winner was Jan Bosworth of Chester, with a prize of $100.

A total of $330 was raised in the 50/50 drawing, split between George Marra of Grass Valley and ARPD.

The rec district also plans on donating $365 raised through the sale of old Extravaganza T-shirts during the event to a yet-to-be-determined charitable organization benefitting victims of the recent Carr Fire.

Deemed a great success by organizers, a lot of exhaustive work went into putting together the annual Street Rod Extravaganza, said Gosney, which included the dedicated efforts of ARPD board members Shane Bergmann, Colleen Garrett and David Slusher.