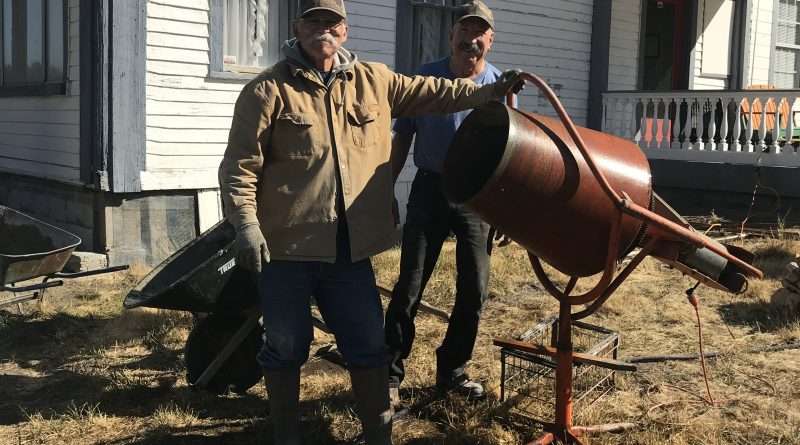 Tim Buckhout and Don Maddelena in front of the antique concrete mixer used to start the repair of the front porch of the old ranch house at White Sulphur Springs in Clio.  Photo by Janet Reihsen
News
September 15, 2021 Editor

On the Monday, Sept.13,  the front porch of the old house at White Sulphur Springs Ranch (WSSR) began to get a facelift that was years in the planning.  After months of delays, the process of restoring the front façade was begun.

Mohawk Valley Stewardship Council (MVSC) volunteers, complete with 40-year-old cement mixers, began the process of pouring the concrete footings that will support the beams of the West porch.  This is the side of the old house that faces Highway 89 and the entrance to the Mohawk Valley.  Years of weathering and neglect resulted in a near collapse of this side of the house.

The ranch was designated an historic structure in the 1983 Plumas County General Plan. In spite of this, the old house was in the process of being dismantled when the community began to take notice and neighbors started a campaign to save the ranch.  The MVSC was formed in 2009 and the restoration of the historic ranch site was begun.

The WSSR website, www.WhiteSulphurSpringsRanch.com, has more about the history and the restoration of the ranch.  It also has information on how the community can support the work of the MVSC.  This includes memberships, direct contributions and legacy brick purchases.