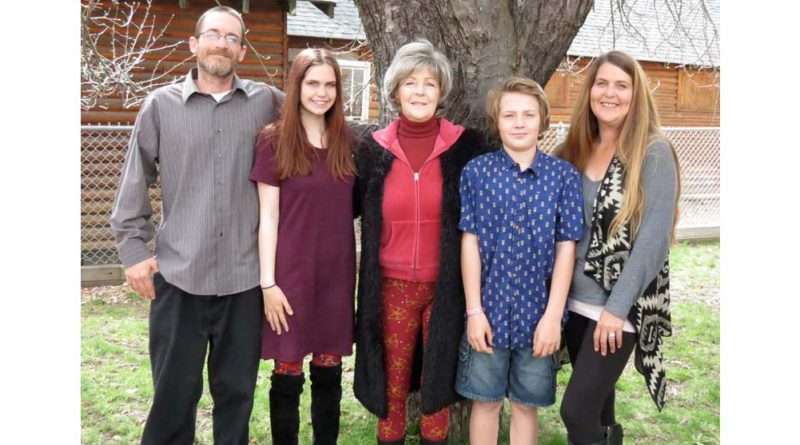 Cancer. It’s a word that nobody really wants to hear, and that word evokes a sense of panic and fear for many, but one local woman is facing down Stage IV small cell lung cancer with the goal of coming out victorious with a smile on her face.

Local Charlene Shipley-Wheat, a long-time youth leader at the Portola United Methodist Church, had always been a fairly healthy person, and a nagging cough accompanied by ongoing headaches in February didn’t strike her as a huge problem initially.

“I figured that it was just a flu virus that had been floating around town, in addition to these headaches that I have experienced for many years,” Charlene recalled.

Daughter-in-law Lindsay Shipley chimed in, saying, “She was very tired, which in itself is unusual. She didn’t really get out of bed very much for about two weeks. When she started having issues with dizziness, and that cough changed a bit, we finally rallied forces and called in ‘Peanut.’”

Five year old Peanut, or Calliope Cole, is a part of the Shipley family, and ultimately became the driving force to convince Charlene that she needed to go get checked out at the Eastern Plumas emergency room.

“We went to the ER, and after a CT scan, they discovered that something wasn’t quite right,” Charlene recalled. “It turns out that there was a large tumor on the left side of my brain which had metastasized,” Charlene shared. “From there, I went straight to St. Mary’s in Reno, got an MRI, and essentially went right into surgery.” The surgeons were able to remove the tumor, which had been blocking her fourth ventricle. The doctors also discovered that the cancer had spread to Charlene’s right lung, as well as finding more than eight lesions on her brain.

“It all came as a shock to the family,” explained Charlene’s son, Jon, who is one of her two children. “We saw her energy levels go from preparing for the 30-Hour Famine, a church event, to a sudden low.” Charlene added, “It astonished me, how tired I was. It felt like someone had suddenly pulled my plug.”

Lindsay Shipley, Jon’s wife, added, “We truly just thought it was something like pneumonia, so it definitely took us aback when all of this started surfacing.” Charlene agreed, calling it a “surreal state” to be in.

“The biggest cornerstone in our family has been our faith,” said Jon. “Between our faith and our positivity, we’ve been able to really pull together as a family and keep a good attitude. Even the doctors have been amazed at our positivity and optimism as we deal with the situation.”

“It’s a growing experience,” Jon continued. “There was no warning, no time to really think about it. The only phrase that comes to mind is ‘gut punch.’”

Charlene smiled at her son, and said, “From the beginning, I wasn’t afraid. I wasn’t worried. I know that God knows what he’s doing.”

After the initial surgery, Charlene went through rounds of radiation, which caused Charlene to “peel like crazy!” The next steps involved many chemotherapy treatments, which will come to six rounds total.

“The chemo is the thing I wasn’t looking forward to,” Charlene said. “I have already been through two cycles of chemotherapy, where I get four hours of chemo on day one, an hour-and-a-half on days two and three, and a ‘remote chemo’ patch for day four.”

Each trip for chemotherapy means a long family stay in Reno, near the St. Mary’s oncology professionals. “It’s just easier to deal with chemo so many days in a row if we stay in Reno,” Charlene explained. “We pay for those trips out of pocket, but the care I’ve received from the cancer care specialists has been amazing.”

Thus far, treatment has gone well, with doctors giving optimistic prognosis for Charlene’s health. “Through it all, we just try to remember that a sense of humor is key,” laughed Charlene. “It’s time to look that monster in the eye and laugh at it.”

The Shipley family firmly holds onto that sense of humor, as was clearly visible with the family of five speaking together about this life hurdle.

“One of my biggest things is to not feel sorry for yourself,” said Charlene. “The doctors come by my room and call it Cancer Comedy Central. We are always laughing.”

Two of her five grandchildren, Hannah and Jacob, have been very involved since the first ER visit. “The kids are homeschooled, and it really couldn’t have worked out any better in our current situation, that way the family can stick together,” said Jon. The tight-knit family has lived together for seven years, and the way that they bolster each other with smiles, laughter and love is touching.

“This whole experience has made our family much stronger in our faith,” Jon explained. Lindsay noted that the experience has been teaching her to let go of much of her anxiety, and that it has helped her to learn to trust that things happen for a reason, and that you can’t dwell on the ‘what-ifs.’

“This whole situation has also really shown me the value of forgiveness and acceptance,” Lindsay articulated. “You never know what the next day will bring.”

Charlene touched on the thing that has really surprised her since that first ER visit, saying, “I’m surprised at how at peace I am. I don’t have the fretting and anxiety that I expected to experience.”

Grandson Jacob spoke up, noting that his grandma has taught him to “never give up,” and granddaughter Hannah said, “My grandma has taught me not to be so afraid. When this all started happening, I didn’t know how to feel or think, really. Grandma told me not to be afraid, and I just kept thinking, how? And Grandma would be right there, teaching me to be brave.”

Charlene smiled, and shared a quote, saying, “I don’t know my future, but I trust the One who holds it.”

The Shipley family has a long road ahead of them in assisting Charlene with her goal of laughing in the monster’s face, and financially, they are facing exorbitant medical costs. For those that wish to support the Shipley family and Charlene’s journey to health, contact Lindsay Shipley at [email protected] or call 616-5261. Donations are also being accepted at the Portola United Methodist Church, at 396 2nd Ave.