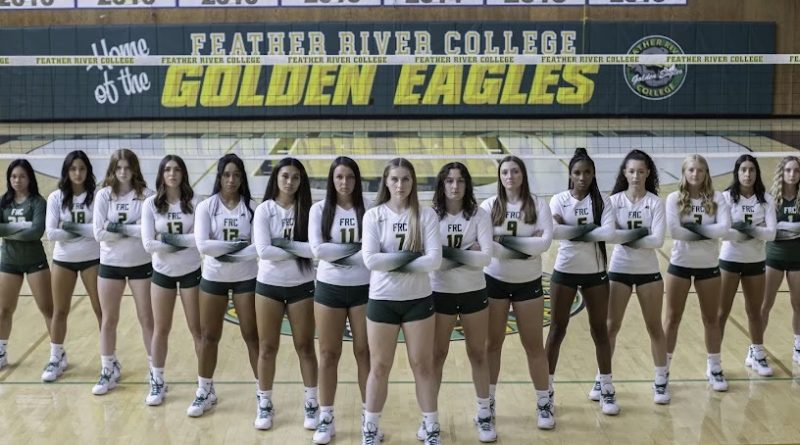 The Feather River College women’s volleyball team was on a mission all season long — to win a state championship and bring the trophy back to Quincy. The Golden Eagles entered the state championship round nearly perfect, with an overall record of 33-1 and riding a 31-match winning streak, with their only loss of the season coming against American River College back on Aug. 27.

This is great news for the supporters who turned out to cheer them on Nov. 30 as they drove out of town to journey to the state championships in Fresno. They also won the coveted title in 2019. In 2020, there were no championships due to COVID and in 2021, the team placed third.

On Dec. 2, the Golden Eagles took on Grossmont College in the Quarterfinals. Grossmont came into the match riding their own 21-match winning streak and had just upset Ventura College, the number 1 seed from Southern California. The Golden Eagles defeated Grossmont in three straight sets (25-20, 25-15, 25-20) to advance to the Semifinals. Hannah Taylor led the Golden Eagles with 16 kills. Setter Nellie Stevenson recorded 8 kills and 30 assists. Sydnee Rowe was a force at the net recording 3 block assists.

On Dec. 3, Feather River took on College of San Mateo. This was the third matchup for the two teams, Feather River swept the Bulldogs on Sept. 2 and Sept. 10. The Golden Eagles defeated College of San Mateo in three straight sets (25-20, 25-18, 25-18) to advanced to the Championship Match. Taylor was dominate once again, recording 17 kills on just 27 attempts and 4 block assists. Carissa Chainey had a bounce back game, recording 11 kills, 3 service aces, and 6 digs. Stevenson dished out 33 assists. Ava Saiers controlled the back row for Feather River and record 8 digs. Seriah Mckinney helped control the net with a .400 hitting percentage and 4 block assists.

On Dec. 4, the Golden Eagles took on American River College and looked to defeat the only team that had defeated them all season long. Feather River defeated American River in three straight sets (25-20, 25-16, 25-21) to win the 2022 California Community College Athletic Association Women’s Volleyball State Championship. Taylor once again led the Golden Eagles in kills with 16, Stevenson dished out 35 assists, and Chainey recorded 10 kills to go along with 11 digs. The play of Eliana Sheridan helped the Golden Eagles earn their second state championship in three years. Sheridan recorded 6 kills, 6 assists, and 10 digs in the championship match. With team success came individual success in the way of the 2022 All-State Tournament Team:

The Feather River College Golden Eagles finished the season with an overall record of 36-1 and a 34 match winning streak.

College president Dr. Kevin Trutna said that he was so proud of the volleyball team members  for their performance on the court as well as off, noting that they were recognized earlier this year for their academic performance by the American Volleyball Coaches Association. Trutna, who cheered the team on in Fresno, also mentioned the supportive fans who made the journey. “We had the largest contingent there,” he said.